Long before its birth in 1959, Torres del Paine National Park was attracting explorers from around the world. While it is true this area of 181,414 hectares is unique for numerous reasons like its elusive wildlife, blue glaciers and spectacular trails, the real stars here are undoubtedly the three granite spires that gave the park its name (“the towers of Paine”).

However, it would be simplistic to explain the fame of the park by only mentioning with the towers. The Torres del Paine mountain range is full of dramatic spires that contrast with the vastness of the surrounding landscapes – including the southern Patagonian ice fields and the plains of the Magallanes region. Its complex geology made it the ultimate challenge for climbers and a miracle of nature for scientists. 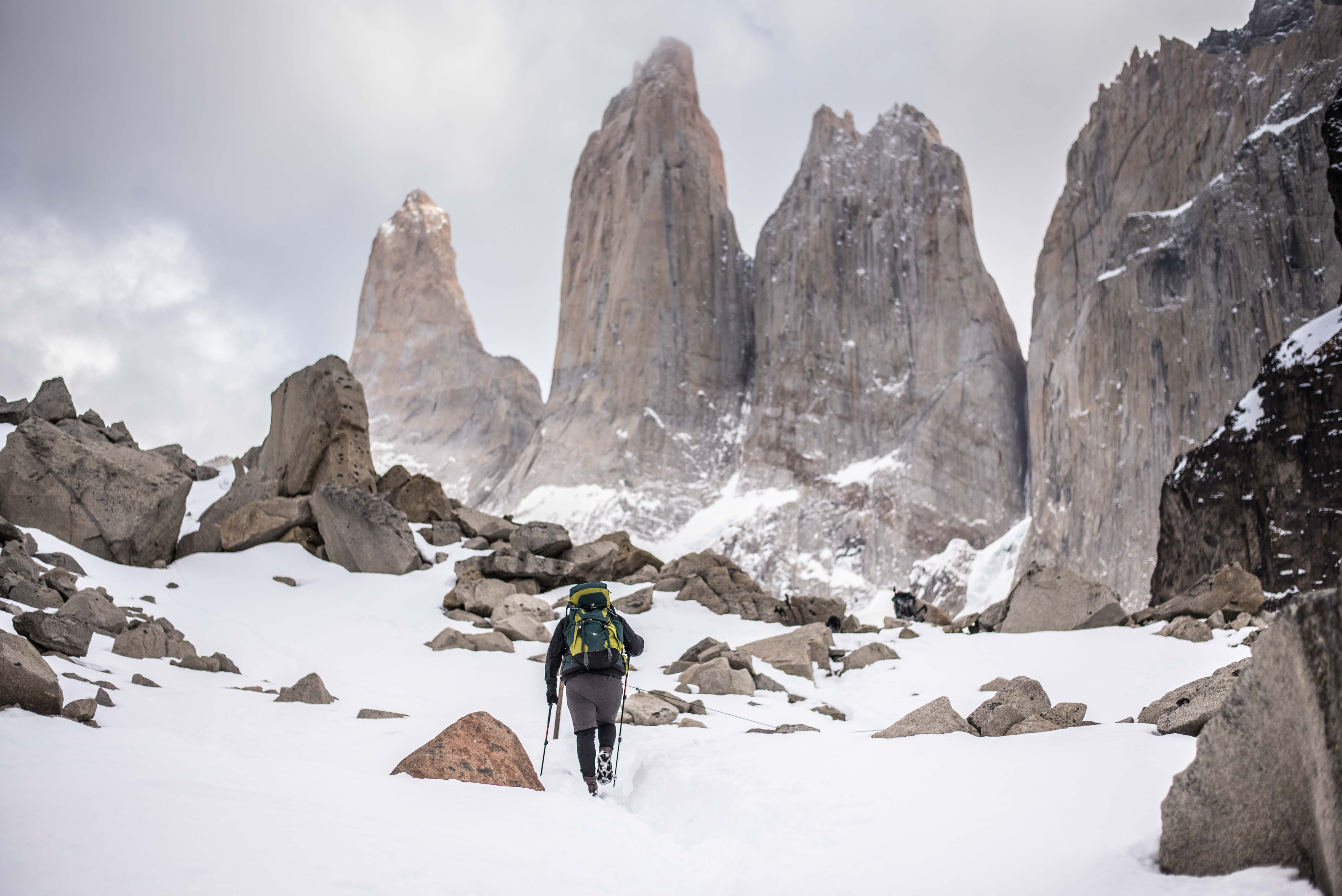 The formation of the massive is like a puzzle that is not yet completed. Its formation started about 13 million years ago, with an intrusion of magma (masses of molten rocks that emanate from the interior of the Earth) happening around the Grey lake are, shaping a laccolith known today as “Macizo Paine” (the Paine massive).

Million years of history shaped some of the most beautiful mountains in the world you can see in this list. 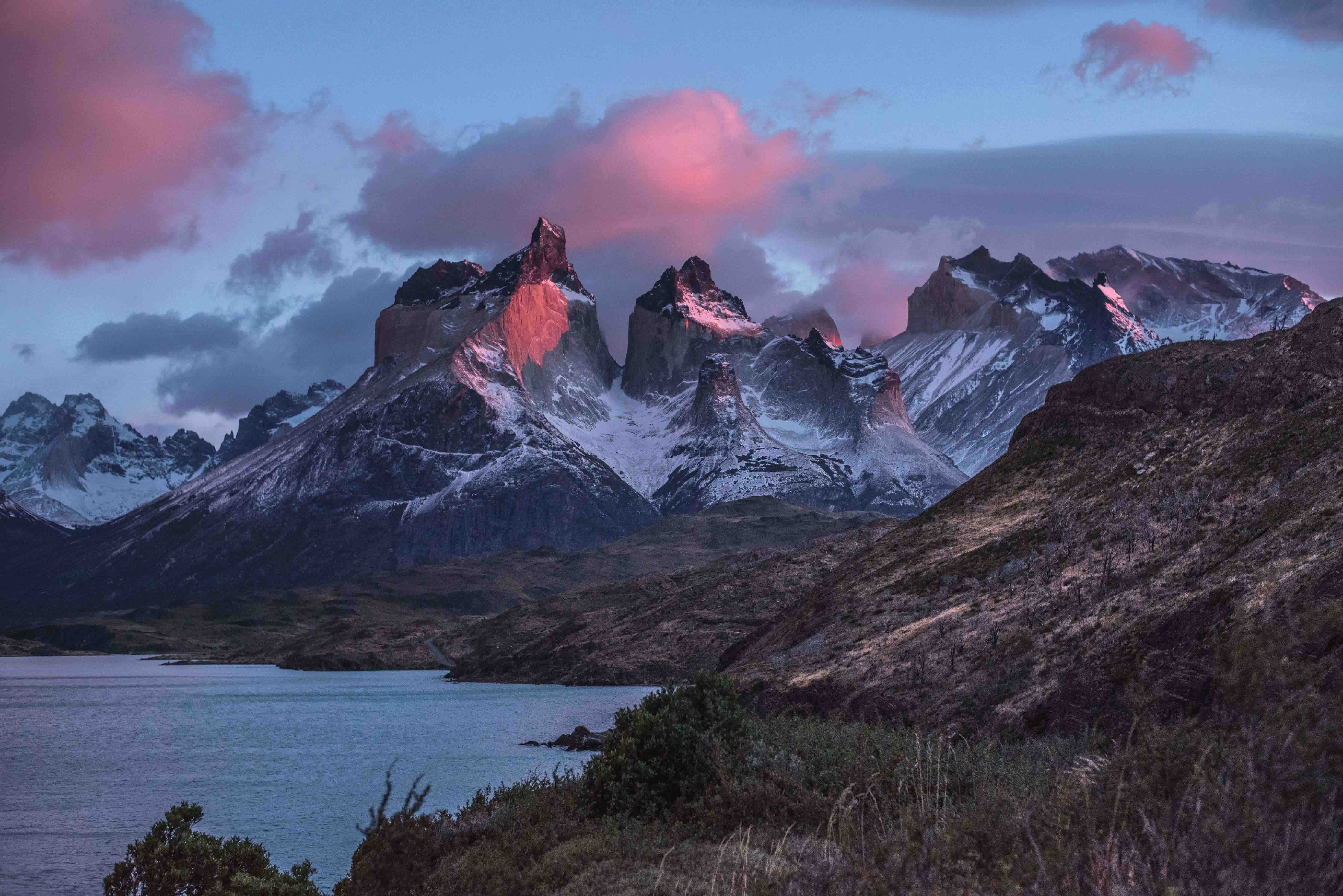 Los Cuernos (“The Horns”) are amongst the most incredible mountains on Earth for their dramatic shape and shades of dark and grey (grey for granite, dark for sedimentary rock). These 3 peaks (the highest one being “Cuerno Central” (2,450meters/8,038ft) can be seen from the western side of the park. The steep slopes of these mountains were shaped by a long glacier erosion.

The best area to see “the Horns” is undoubtedly the Pehoe Lake area, from where you can get a panoramic view of the mountain range. You can also hike to the “Cuernos Viewpoint”, an easy 3-hour hike starting from Salto Grande. And if you hike the W Trek, you’ll hike along these rock giants in the French Valley. 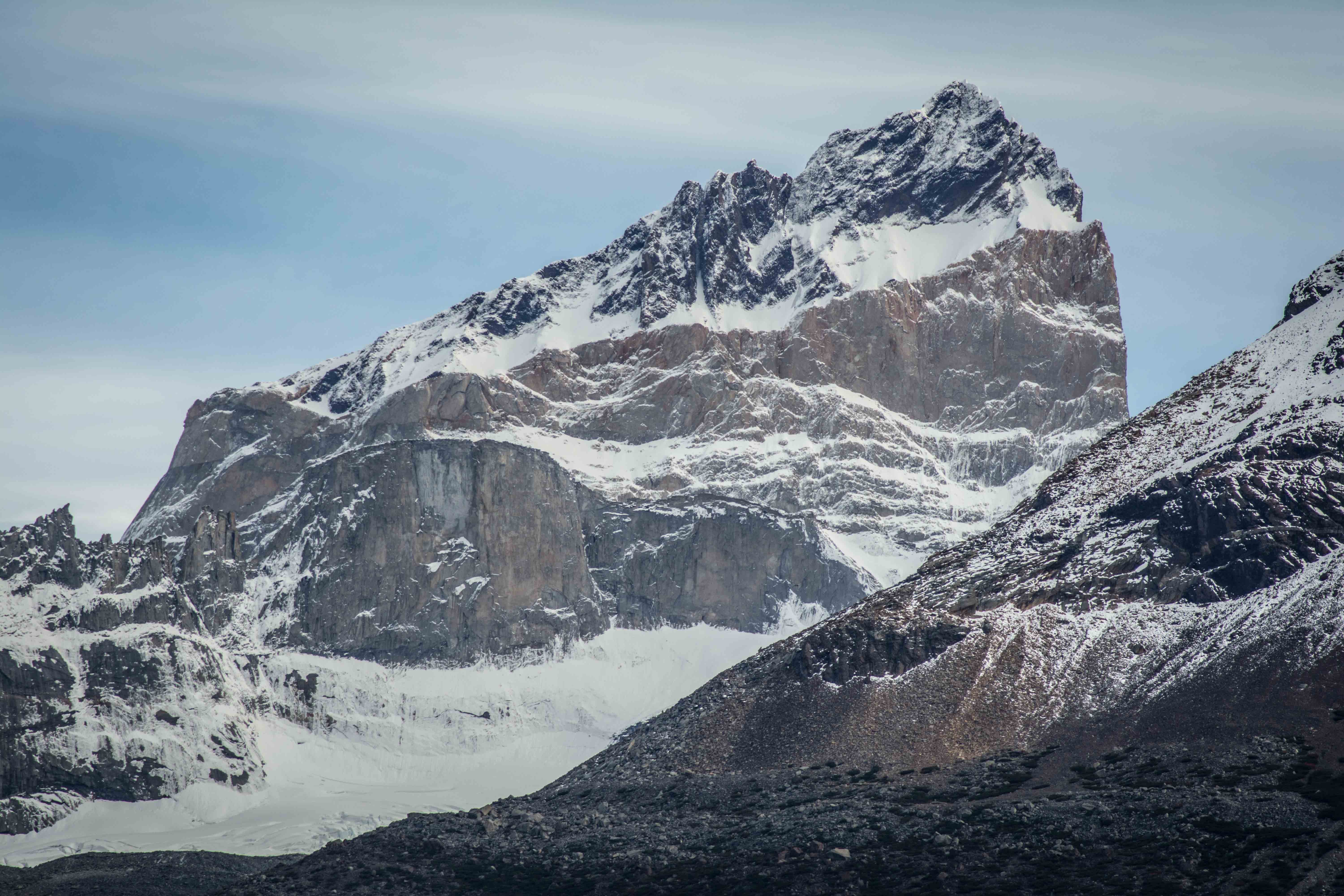 This spectacular peak of granite isn’t easy to see yet it is higher (and maybe as impressive) as its neighbors, Los Cuernos. It is located right between the French Valley and the Silence valley, a remote area of the mountain range.

The best area to see Cerro Fortaleza is near the Nordenskjöld Viewpoint (there is a nice viewpoint near the road from which you can see the majesty of Cerro Fortaleza) or in French Valley (the British Viewpoint). You can also hike to this mountain through the Bader valley (a guide is needed).

The highest peak in Torres del Paine National Park, Mt. Paine Grande, is also one of the most challenging mountains to climb in Patagonia. Its giant glacier at the top is covered with clouds most of the time, and it is hard to find a day with no wind on this giant of ice and rock.

A few hanging glaciers gather on the eastern side of the mountain and many avalanches can be observed from French Valley. 4 peaks (Cumbre Principal – the main one -,Punta Bariloche, Cima Central and Cima Norte) form this mountain than can be seen from the Western side of the park.

The best places to see Paine Grande are the Pehoe Lake area and the Grey Lake/ Grey Glacier area. 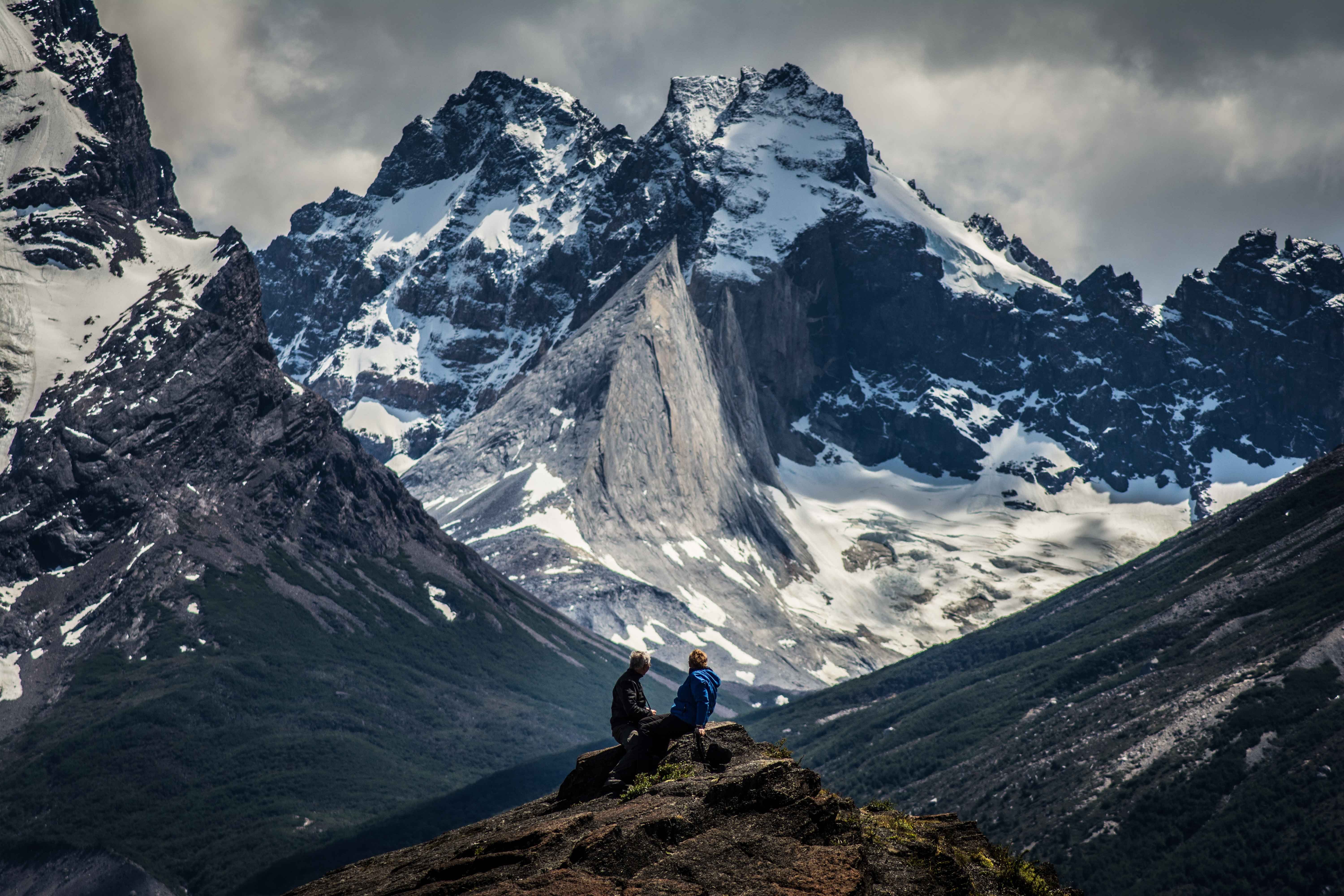 The Shark’s Fin (Aleta de Tiburón) is located at the bottom of the French Valley, and it is not difficult to understand the origin of its peculiar name. The steep granite of the Shark’s Fin was shaped through million years of glacial erosion and it well-known amongst climbers in the area.

The Shark’s Fin can be seen from the British lookout (French Valley) and also from the Pehoe Lake area. It is surrounded by some other beautiful peaks such as Cota 2000, Castillo, Punta Quirquinchos, Gemelos, Catedral and Fortaleza. 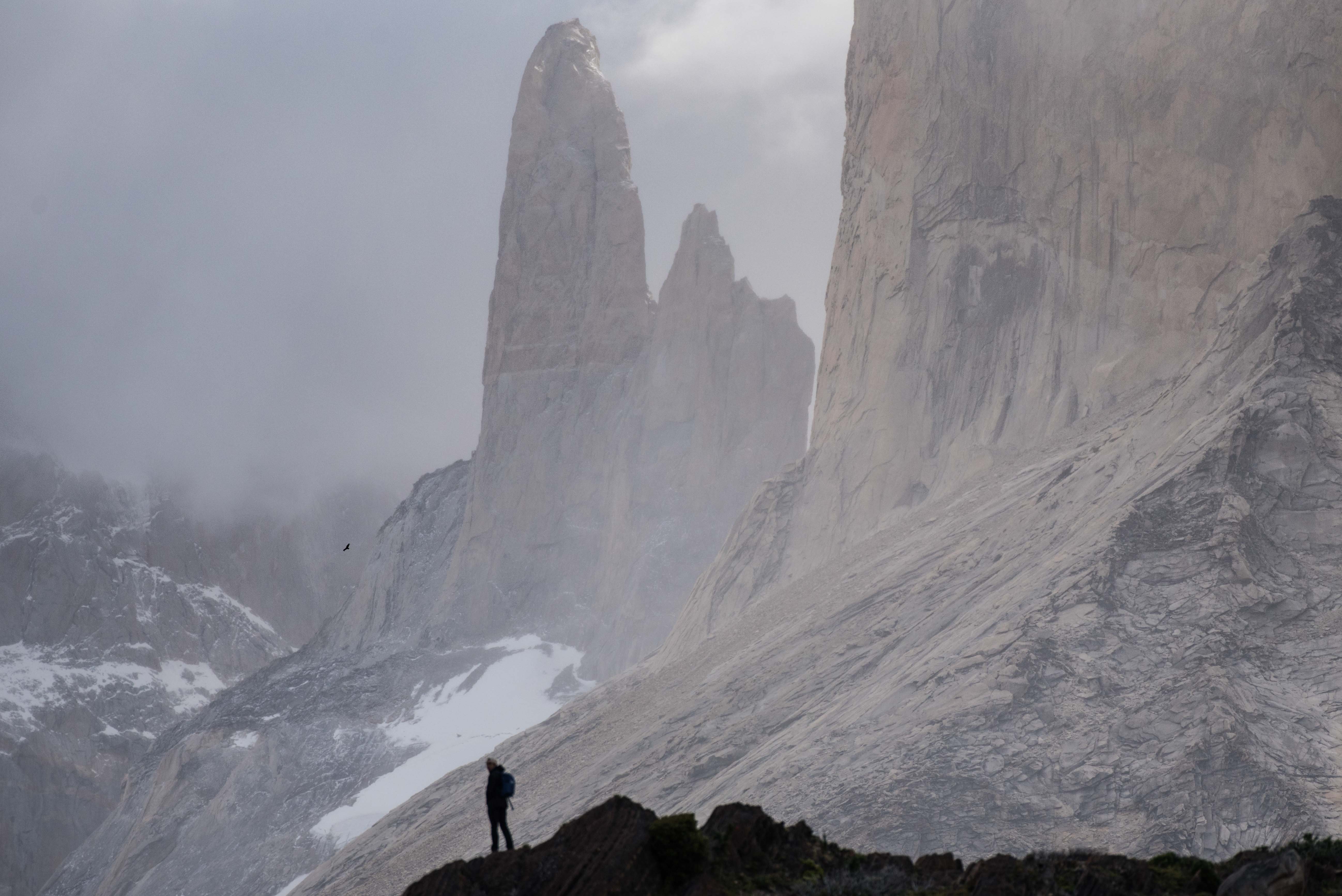 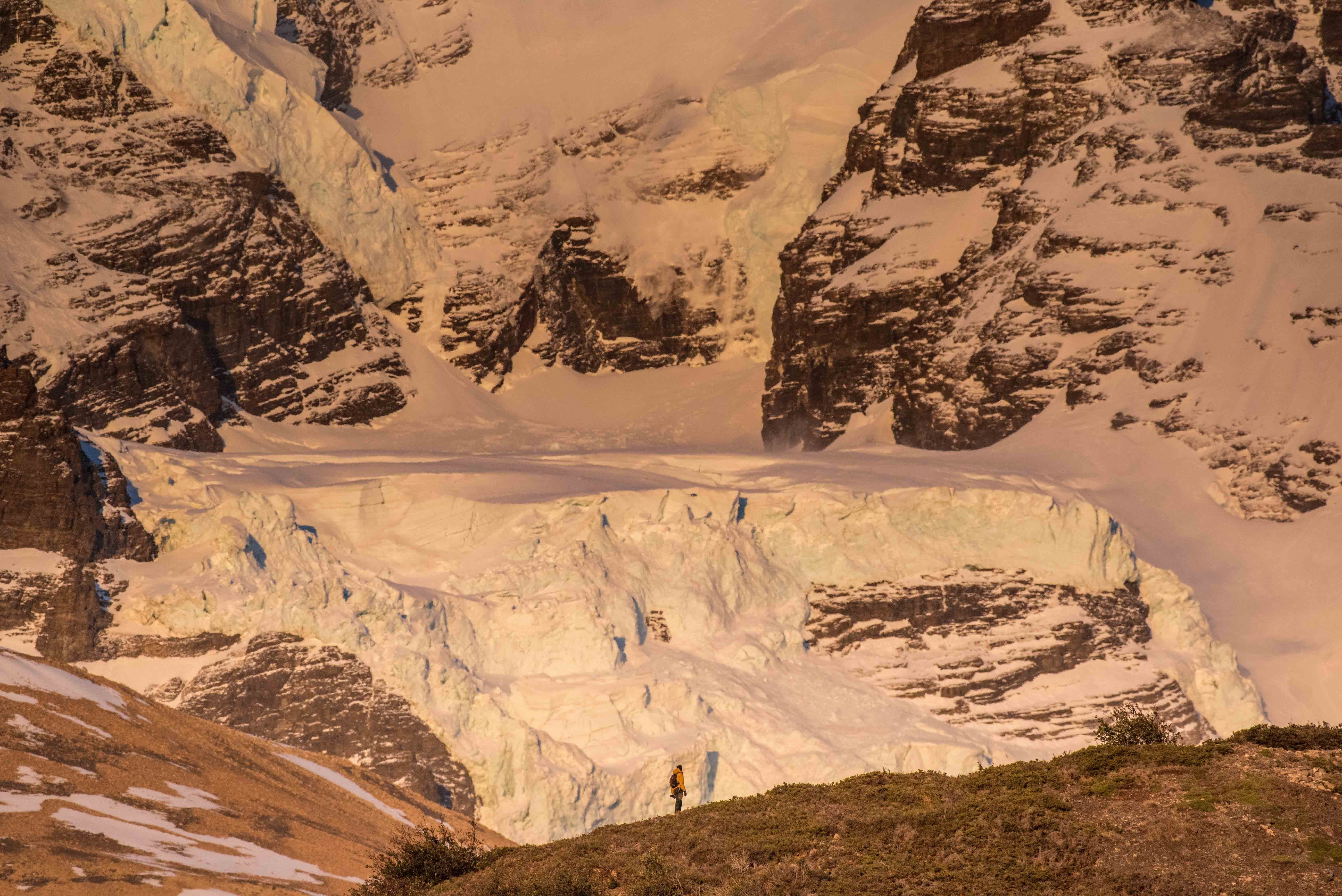 This impressive mountain covered by a beautiful hanging glacier can be seen from the main viewpoints of the park yet its vastness if best appreciated from the eastern side of the park – including EcoCamp and Laguna Azul. Almirante Nieto is the nearest neighbor to the towers. It is also one of the least technical mountains to climb which doesn’t mean reaching its summit is an easy task (remember Patagonia is windy). 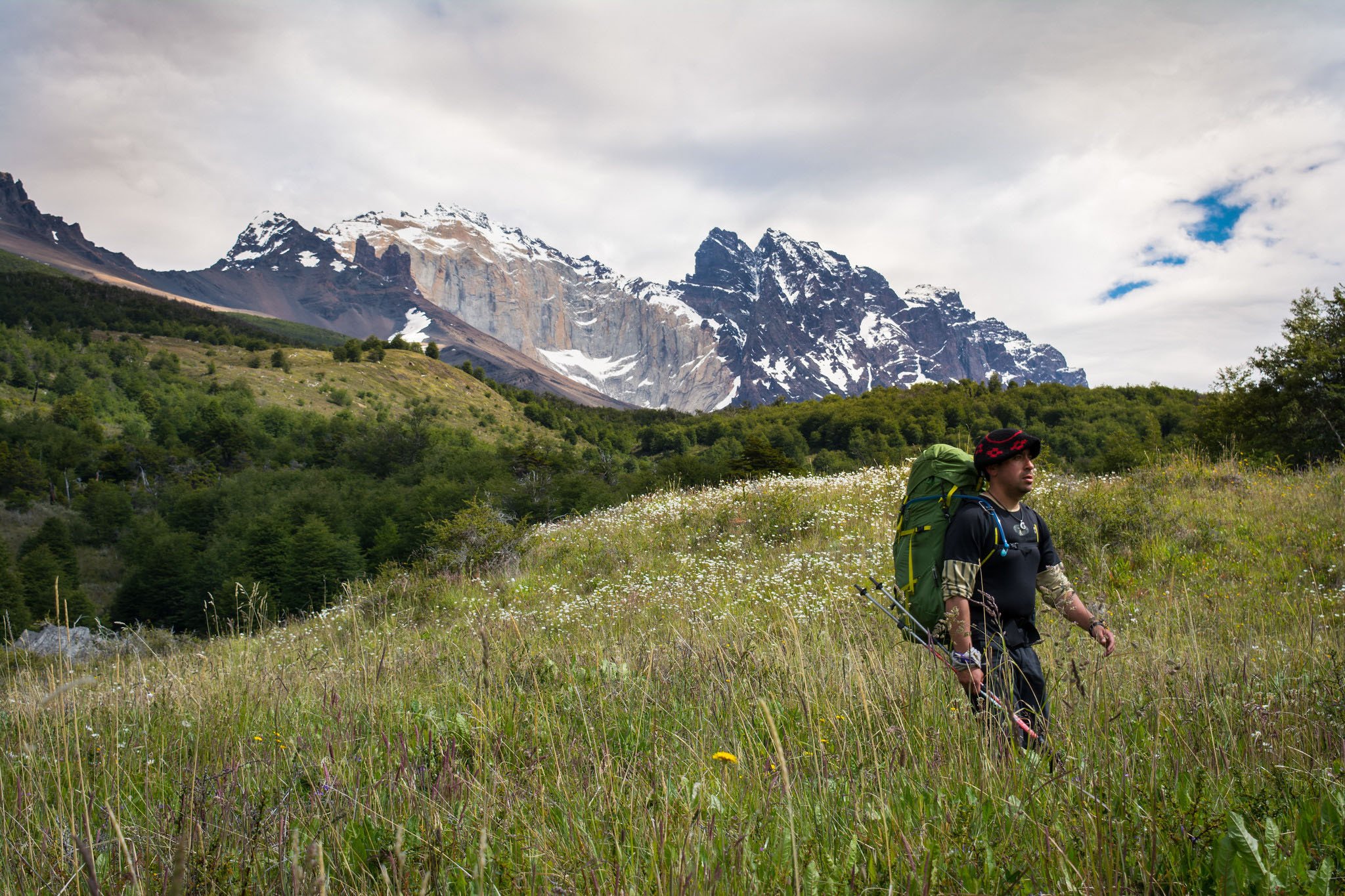 The steep slopes of Cabeza de Indio are located in a remote area of the national park and the only way to see it is by hiking the Torres del Paine Circuit (“O Trek”). Cabeza de Indio means the “Indian’s face” and you may get the meaning of that name if you stare at it for a while from the Paine lake area.

You can camp near that mountain at the Dickson campsite, on the first night of the O Trek. 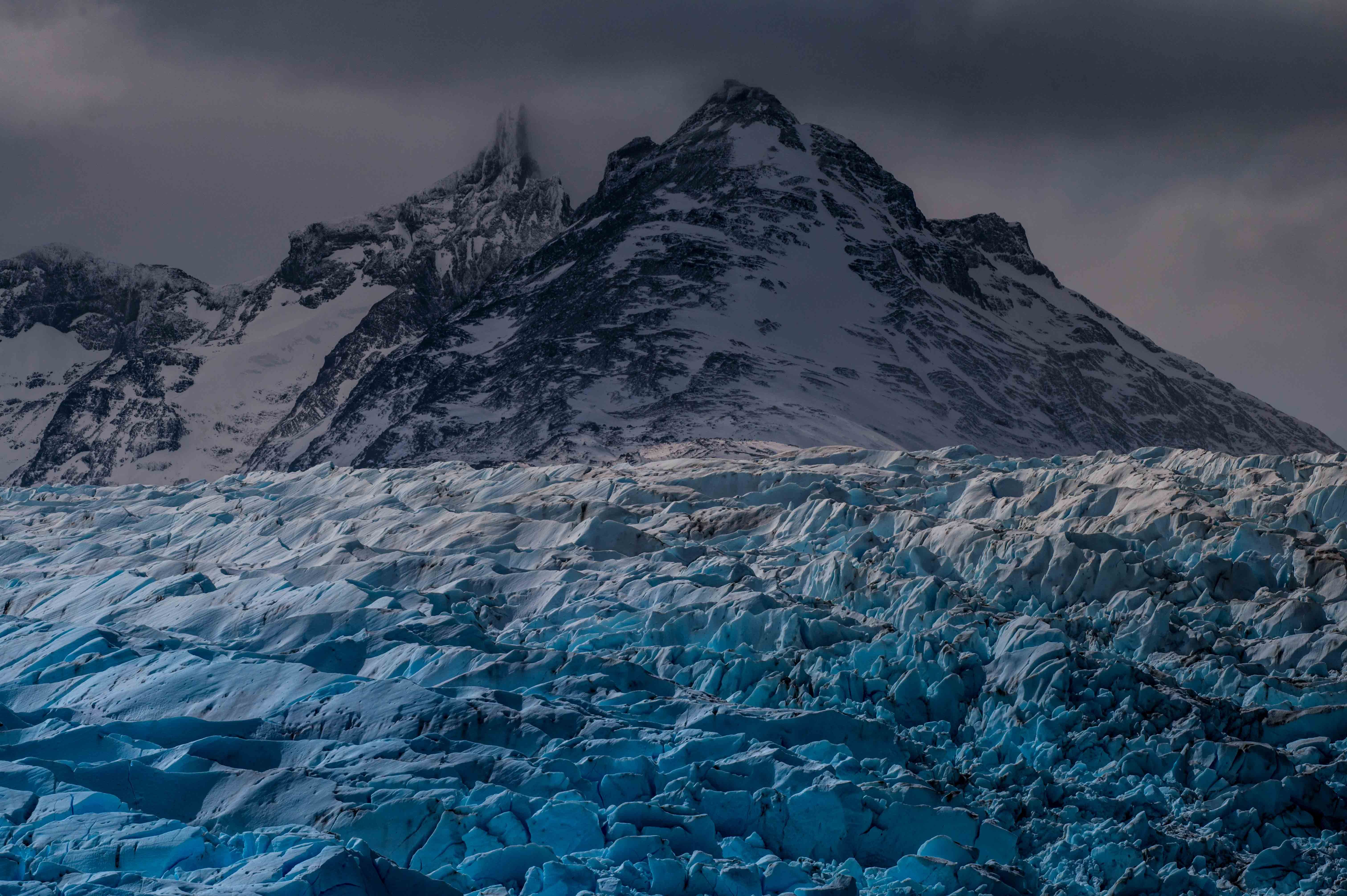 Few people know this remote peak of the park, yet many travelers see it on a daily basis. It is one of the steepest peaks you’ll find near Grey glacier and it is impossible to miss it on a navigation to this beautiful area of the southern Patagonia ice fields.

Cerro Escudo is a direct neighbor to Cerro Fortaleza and its steep slope can be reached with a day hike through the desolate landscapes of the Silence Valley. This remote mountain is hard to see as it is hidden at the bottom of the Silence Valley, yet all climbers aiming to the towers will see it as it is located next to the climbers’ base camp. 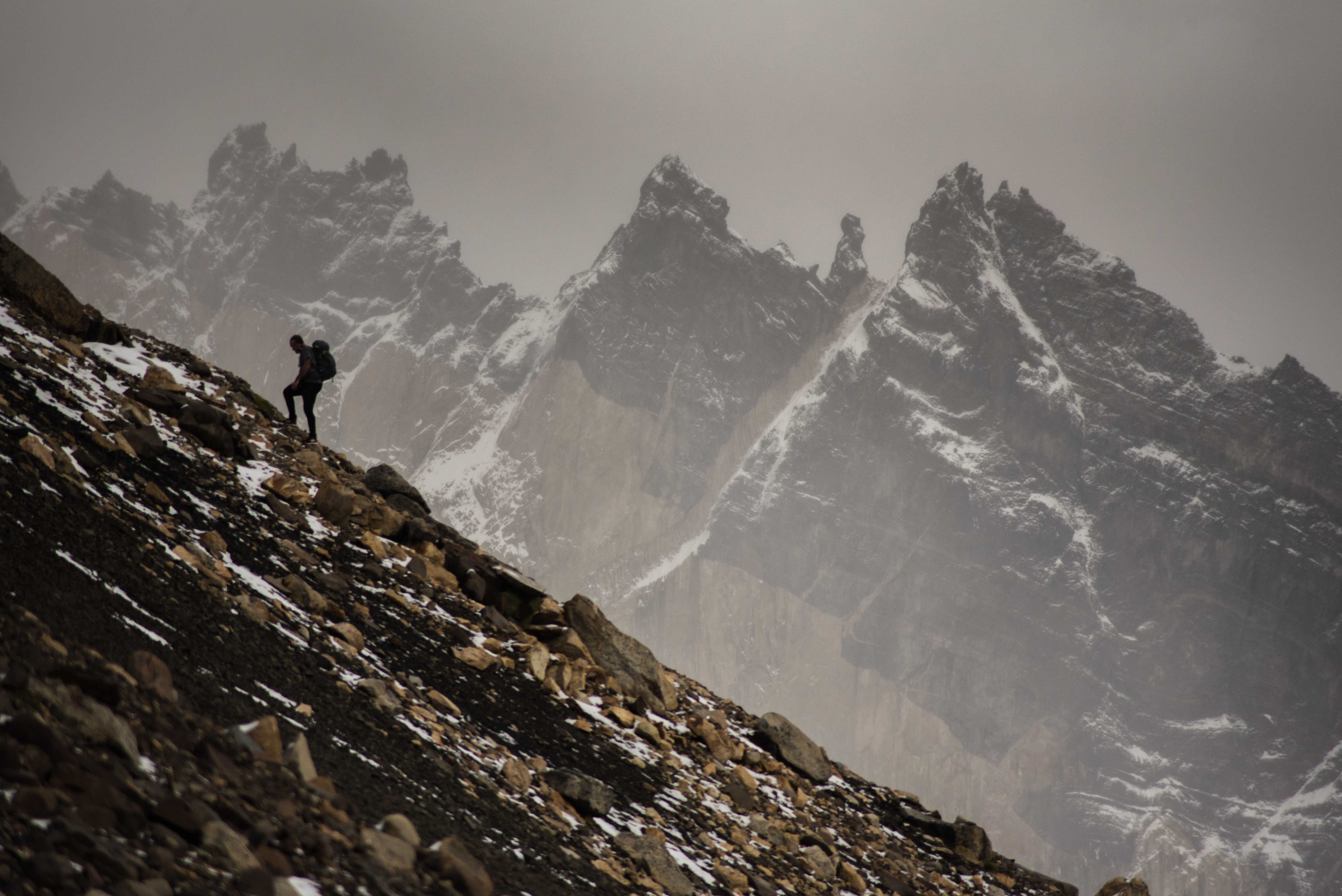 This granite peak near the towers is often confused with the towers as it is true it looks like a fourth tower. It is also known locally as “Cerro Peineta” (The “Comb”), with its peculiar shapes and a nice layer of sedimentary rock at the top. Cerro Nido de Condor (“The Condor’s Nest”) can be seen from the eastern side of the park and you will hike along this mountain on the famous trek to the towers’ base viewpoint. 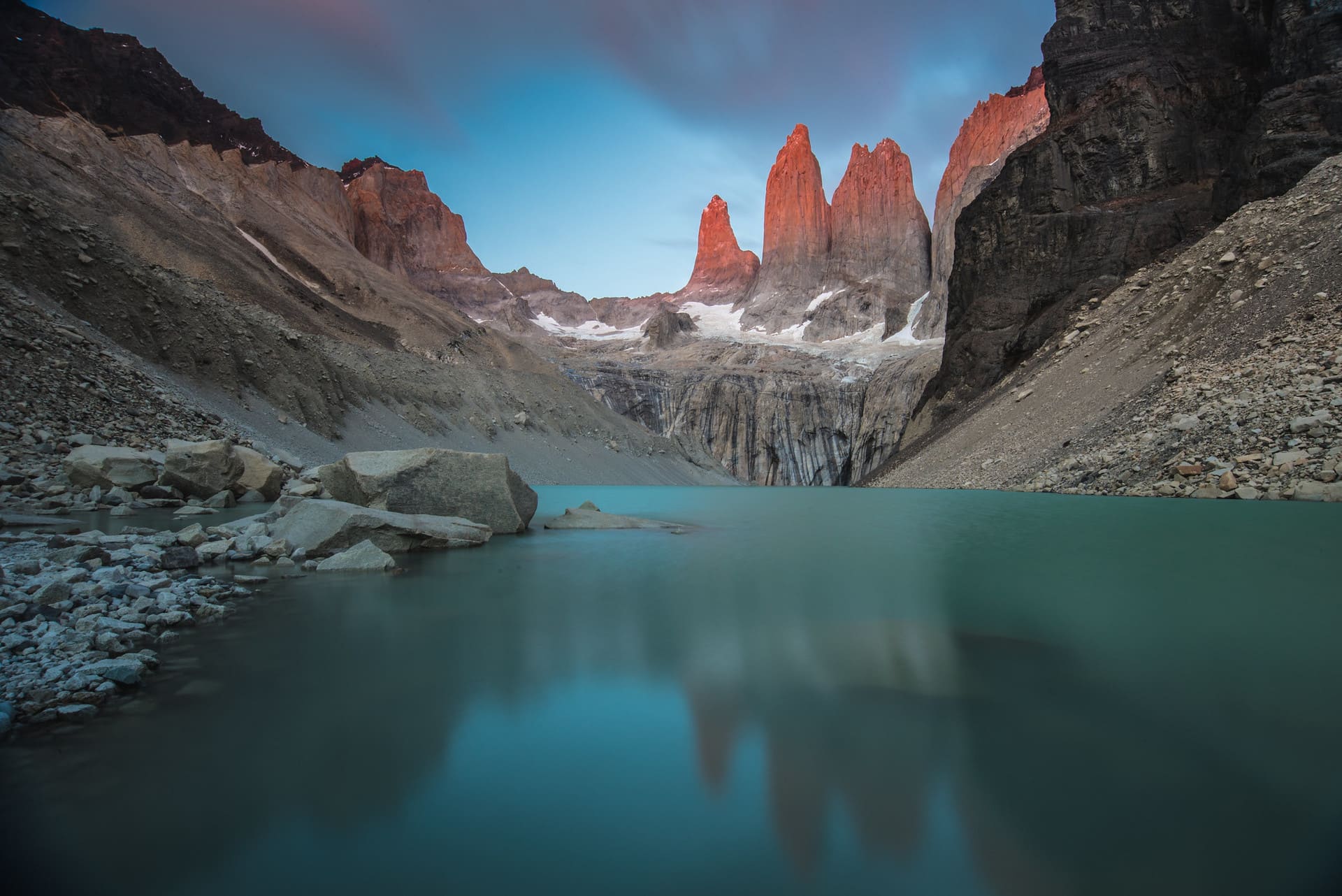 Impossible to conclude this publication without mentioning the stars of the national park. The granite towers of Torres del Paine have been fascinating travelers around the world for more than a century. In 1879 Lady Florence Dixie, the first tourist to ever reach the area – a british explorer and writer known for her book “across Patagonia” – was the first to describe the spires as “Cleopatra’s Needles”.

The towers were shaped by the erosion of the glacier. Today, there is only one small glacier remaining at the base of the towers, that feeds the famous lake that can be reached on a full day hike – namely the most famous hike in Chile’s Patagonia, a 22km/13mi awesome hike that starts from EcoCamp. The towers can be seen from most viewpoints in the park but the best places to see them are the Towers’ Base Viewpoint, Cerro Paine and Laguna Azul.

Do you want to see these peaks with your own eyes? Send us an email!

The EcoCamp Patagonia team wants to provide you with the most complete and updated information so you can prepare yourself for a trip of a lifetime in the southern tip of South America!

Birds to Look For in Torres del Paine

Carissa Perry Nature
Torres del Paine is home to 118 types of different bird species. Wading birds, such as the Chilean Flamingo, live in the numerous lakes and lagoons...
Read more