“The reason we race isn't so much to beat each other... but to be with each other.”

The emotion of running in Patagonia is somewhat mystical. It’s hard to say if it comes from the majesty of the changing landscapes, the unpredictable weather conditions, or the remoteness of the place. But be sure that the sensation of running here, at the world’s end, will leave its mark on you forever. And it’s even stronger if you run with others.

Thousands of runners from around the world share their hunger for running at the Patagonian International Marathon (PIM), an event founded by NIGSA (Nomadas International Group SA) that takes place every year in the heart of Torres del Paine National Park. Runners choose between four race distances (10K, 21K, 42K and 60K) to compete in one of Chile’s - and the world’s! - finest national parks. 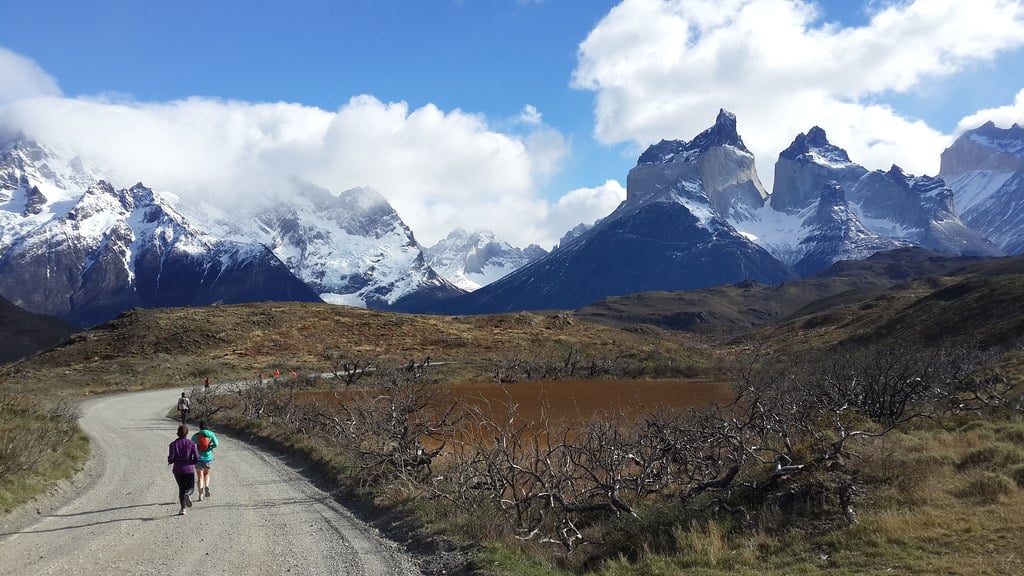 Yes, running in the world's end is a bit like embracing the Earth...

Here at EcoCamp, we wanted to understand better how awesome, special, and difficult the event was - so we went straight to the source - the runners themselves - to discover how they prepared themselves and what they actually experienced. For future PIM runners, use this information to find out more, get inspired, and convince yourself not to miss the date! 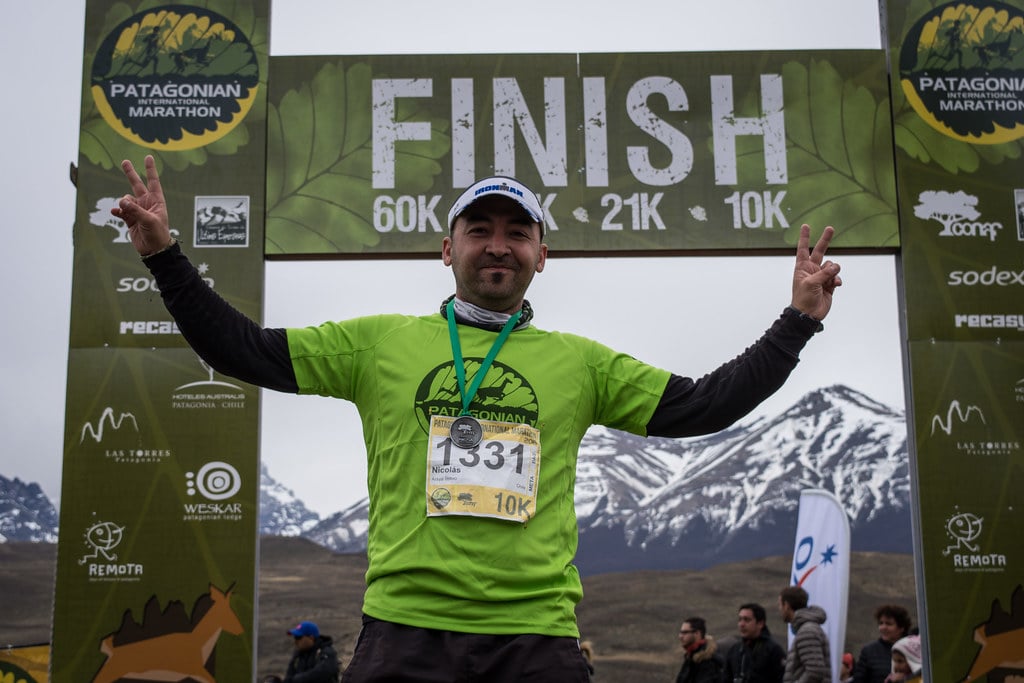 Nicolas conquered one of his country's most beloved symbols!

How was it to run the 10K? The landscape was astonishing. Despite the race’s relative shortness, you run through a good diversity of landscapes. You get a good insight into the pampa, get to meet the guanacos, and as you approach the finish line the Towers appear in an awesome, magic setting.

What was the most difficult about this race? The first 5 kilometers were the most tiring, with the highest difference in level. You go up and down all the time. If you take the level differences into account, the race is actually 11,2 kilometers long – which is a significant divergence. 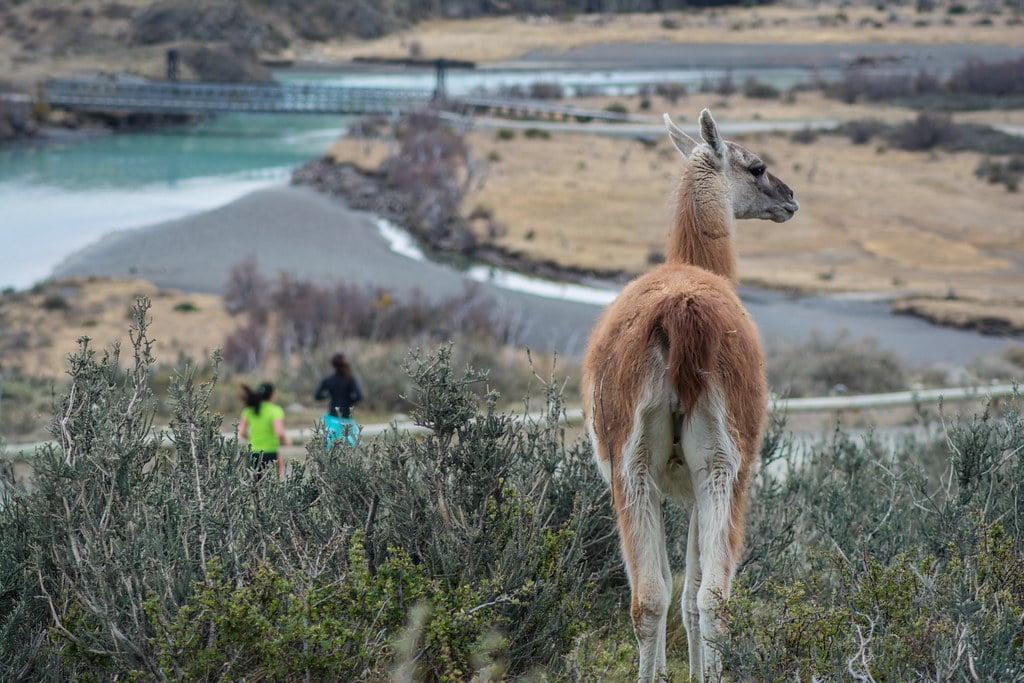 Believe it or not, guanacos are awesome supporters!

How did you prepare for the race? For 3 months I trained 3 times a week for around an hour at the gym. I also used to run one hour – about 10 kilometers - every Sunday, and hiked on the weekends as often as I could. Having mountains near Santiago kinda helps! As for the food, I gave up refined sugar - and soda! - for the 4 months previous to the event and used to have a light breakfast: muesli, banana, and almonds.

How would you advise other 10K runners? If you’re used to running on flat areas, be prepared for the hills. Cross-country training is a good option! 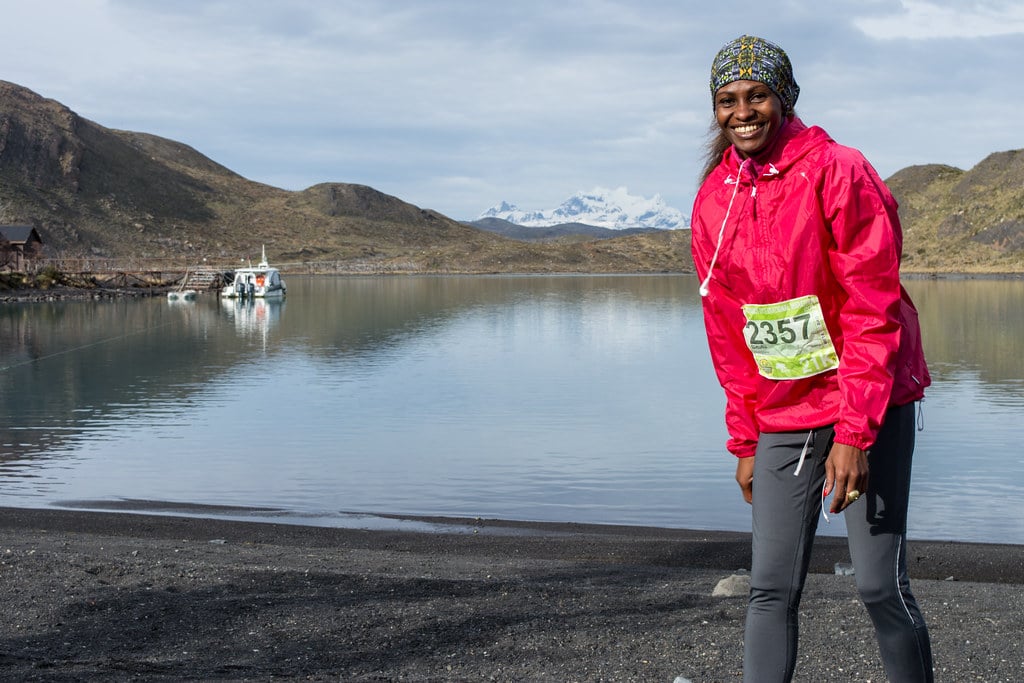 First rule of the game: smile!

How was it to run the 21K? I think the race is great to appreciate the beauty of the place, not to chase the best results at all costs. It was amazing to run with people from around the world and to get to know others who share the same passion – in the middle of nowhere!

What was the most difficult about this race? I don’t think the race was difficult. If you keep a regular speed and work out your mind, you will spend a pleasant time running. And the setting is so incredible that you don’t concentrate on how tired you are! 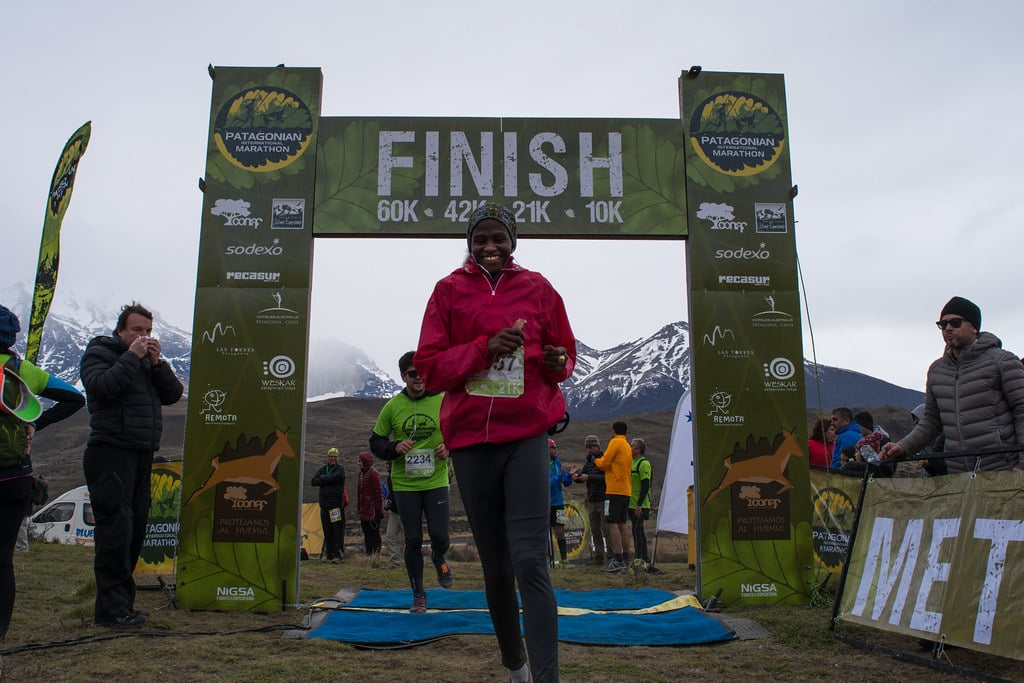 Finish line (at Laguna Amarga), after almost 3 hours on the run!

How did you prepare for the race? I wish I could run more, but I use to run about twice a week in 3 different locations in Nairobi with different elevations – although no elevation is as steep as it is in Patagonia! The day before the race, I ate carbohydrates (such as pasta). As for the breakfast, a couple of hours before the marathon started, I had muesli, orange juice, and a banana – which gave me instant energy to start the day!

How would you advise other 21K runners? Because of Patagonia’s changing weather, it’s important to have different layers of clothes. Be prepared for the wind and invest in good shoes! 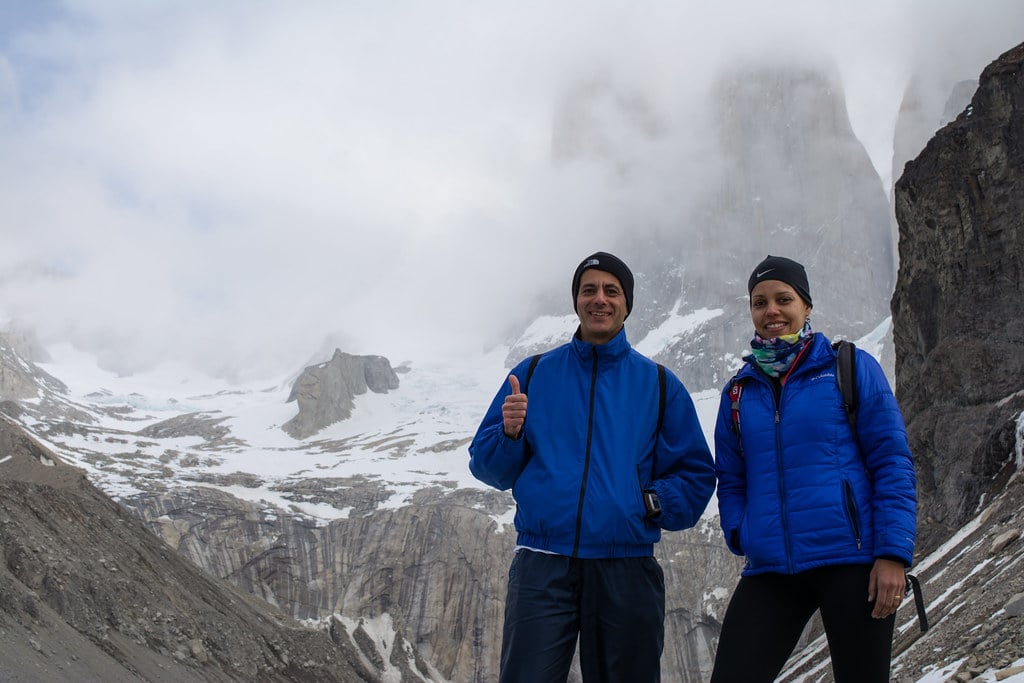 Ronaldo and Enia, our Brazilian runners, one day after the race!

How was it to run the 42K? I didn’t know what to expect about this race. But the landscape surprised me - it’s different from other places as you run at the feet of majestic mountains. You run in the pampa, so even though it is sometimes hilly it’s not like running an ultra-trail either! And the people you get to meet make everything more exciting.

What was the most difficult about this race? The low temperature made it different from what I had experienced before, it made it harder as I generally don’t run in the cold.

How did you prepare for the race? I use to run marathons regularly. That’s a must if you want to run a marathon for real. I started with 16K, then 20K, 25K and 30K. 42 kilometers can be exhausting if you don’t run a few hours a week!

How would you advise other 42K runners? Run, run and run before the race...Bringing good running pants is important, as you can get cold or wet in the case of heavy rain and this can have a major impact on your running experience!

How was it to run the 42K? It was the first time I ran in such a mountainous, extreme environment. The landscape changes a lot from the beginning (Pehoe Lake) to the finish line (Laguna Amarga). You start with stunning blue lakes and end up with the arid pampa and view of the famous Towers.

What was the most difficult about this race? It’s never easy to run such distances. The characteristics were new for me, but we were lucky with the weather. The last kilometers were the most difficult; but my strategy helped me, as I started quite slowly and could spare energy for the last minutes. I concentrated on the run, I didn’t even listen to music. There weren’t any distractions for me and I think that’s why I achieved such a good result. 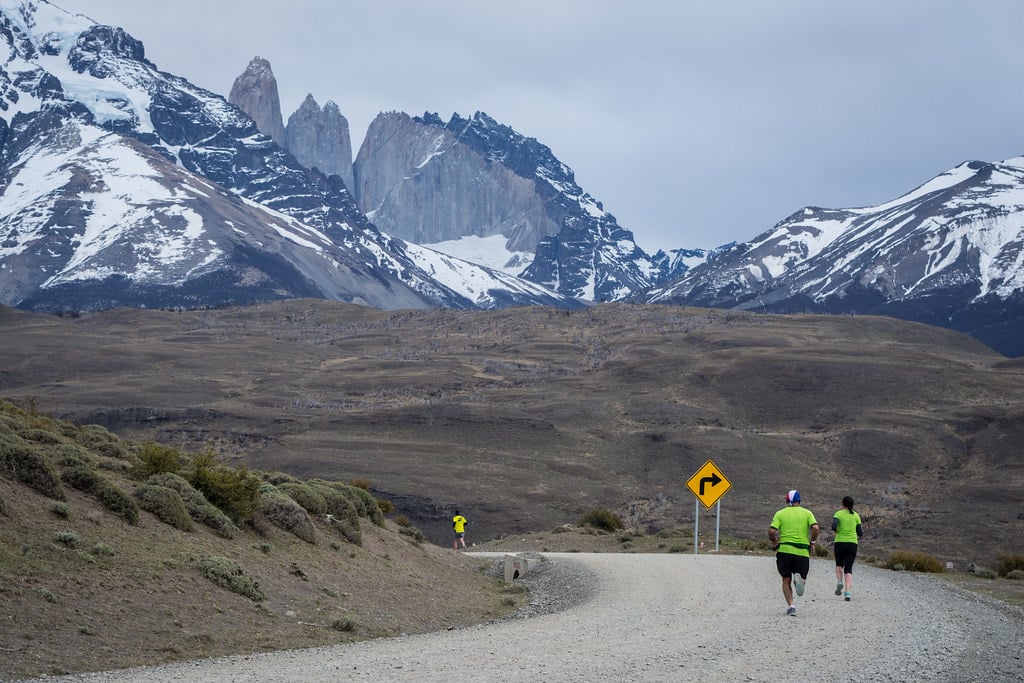 No doubt about it : this is called "eight wonder of the world" for a good reason!

How did you prepare for the race? I saw a nutritionist who helped me eat the right foods to prepare for running such a distance. I ate lot of carbohydrates and almost no sugar. Light food is recommended. Two days prior to the marathon, I consumed lots of salty food. I ran a few half-marathons (21K) before running the 42K – and generally ran four times a week.

How would you advise other 42K runners? Drink a lot of water and concentrate on the run…it should be enough! 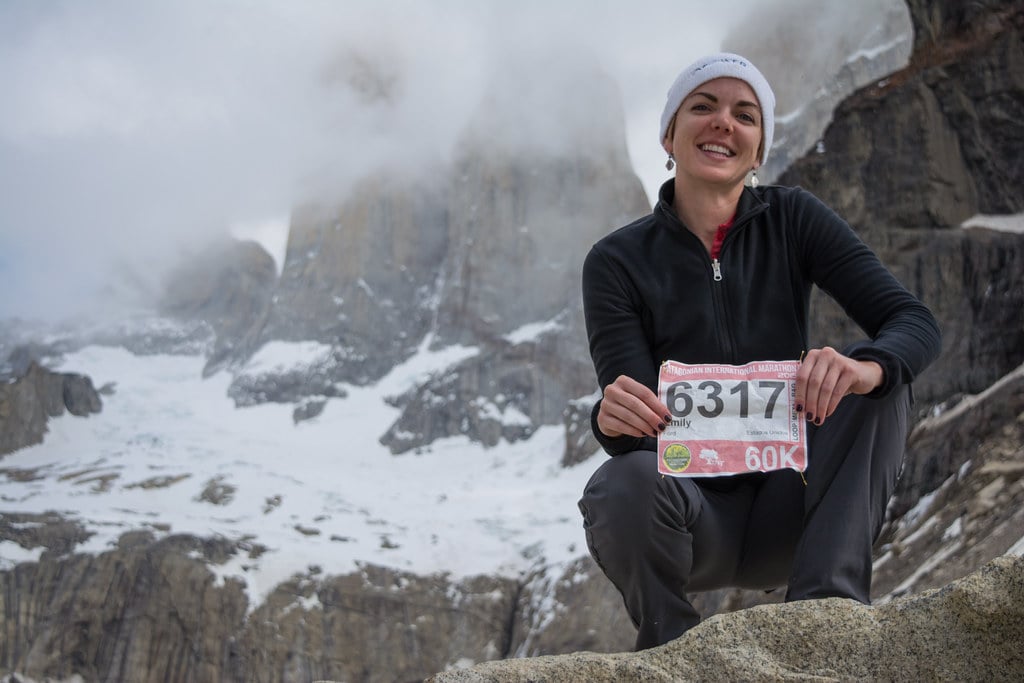 How was it to run the 60K? I felt it was an accomplishment. The surroundings were fantastic. We started close to the Southern Patagonian Ice Fields (close to Grey Glacier) and ended up in a drier area, close to the Towers. You run a lot, but you also make new friendships with people who understand the emotion of running. Both the place and the people make it special.

What was the most difficult about this race? The first 2 kilometers were really technical, just because it was on the beach (Grey beach) with rocks everywhere, so it was challenging. Once I took the pace, I could run peacefully…and enjoy every kilometer!

How did you prepare for the race? I did 4 months of training and ran about 6 days a week. Two of these days would be long runs (about 15 miles), and the rest were shorter (like 6 or 8 miles). I also did cross-fit, and practiced running both flat and hilly routes. I consumed a lot of energy gel and dry pineapple. I tried not to eat too much (and drank almost no alcohol!). The week before I ran, I slept a lot. On D-Day I had chocolate cereal and a little bit of fruit for breakfast. About an hour before the start, I had a protein bar. Then I was ready!

How would you advise other 60K runners? Do a lot of hills and long distances in different kinds of weather. Take into consideration that you have to run a long way in changing weather conditions, so you must be well-prepared for the cold! 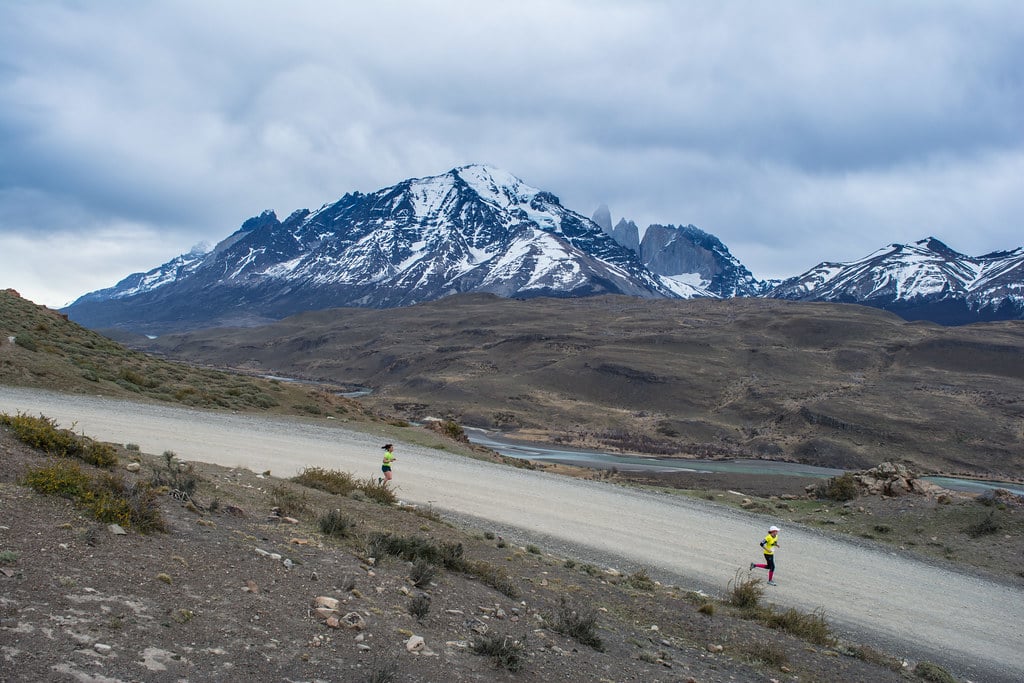 In Patagonia, a dark sky does not always mean bad weather: we did not have rain at all for the 2015 edition!