We all know yoga: the fascinating discipline born in India that quickly became popular worldwide after it was introduced to the west in the late 19th Century. But why can it be so difficult to describe the mysticism of practicing yoga? Yoga is indeed not a mere physical exercise: it connects, eases the body, mind, and soul and may even heal pains and sorrows. Yoga is now a universal language of spiritual exercise in Western countries, with schools and alternative teachings constantly on the rise. But have you ever thought about practicing yoga in the far south, far from the noise of the city, and as close as possible to Mother Earth?

EcoCamp Patagonia, the first geodesic hotel in the world, opened its own Yoga Dome in 2013. The dome is located in the heart of the very impressive Torres del Paine National Park in Chilean Patagonia. And believe me, that place has something special that convinces even the least flexible person to make time for yoga. We met Ivana, our yoga instructor, so we could understand why yoga is great - and even better in Patagonia.

What’s the aim of yoga?

Yoga aims to unite the individual’s unit consciousness with the infinite consciousness. In a way, yoga is a technology of consciousness which creates harmony with the balance of the mind, the body, and chakras (energy points in the subtle “non-physical” body), using the eight limbs (elements) of yoga (Yama, Niyama, Asana, Pranayama, Pratyahara, Dharana, Dyana, and Samadhi). These eight limbs are basically steps to follow for a meaningful and purposeful life: they include universal morality, body postures, and concentration. To put it simply, yoga is the union of one’s consciousness to balance body, mind, and soul!

How did you fall in love with yoga?

It was quite unexpected. As part of my studies (business engineering), I went to Netherlands for a eight-month internship. My flatmate used to do yoga, which intrigued me. He taught me Sivananda yoga (a form of Hatha yoga), which I immediately liked. As 2011 ended, I made good resolutions for 2012 and decided to practice yoga every day. I kept doing so when I came back to Chile, and I started practicing Kundalini yoga, until I became a yoga instructor in March 2013. First, I instructed in a yoga center called Agni Yoga in Santiago. And then I ended up instructing in Torres del Paine! 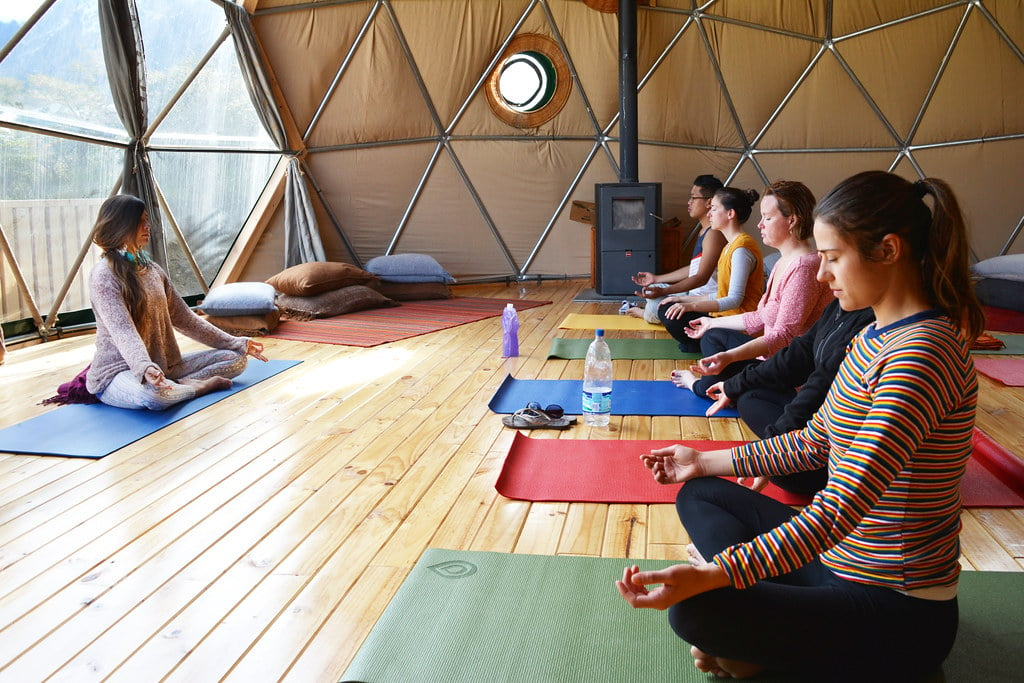 The yoga session can start! 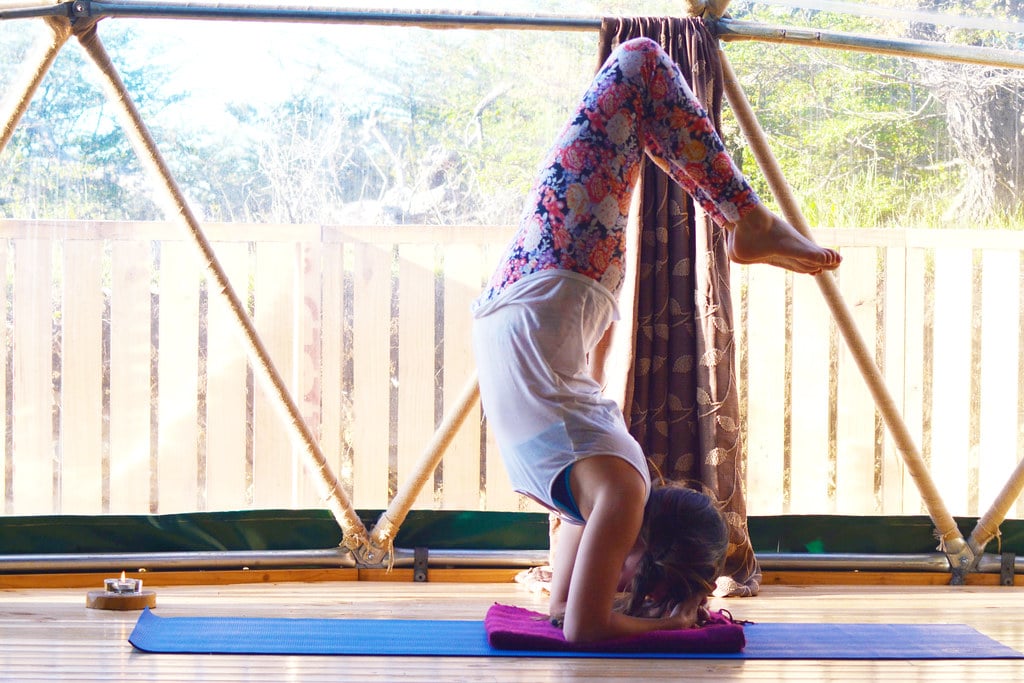 If the purpose of yoga is not to expand like a rubber band, yes, being flexible is good!

The yoga dome is located in the middle of a magnificent landscape, which helps ease the mind and allows a better connection with the yoga class. It’s an ideal place to listen to your body and concentrate on your breathing; so overall Torres del Paine is amazing as it lets people feel calm. The setting and the quietness of the yoga dome makes the connection with oneself easy!

How did yoga change your life?

Yoga taught me discipline. I learned to practice yoga everyday without forgetting a single session! It allowed me to be more in contact with myself and my body. Yoga is a good way to understand oneself better, but also to understand others. It brought more wellbeing to my life, so I am overall happier than I was before starting yoga!

How does yoga help you connect with nature?

Yoga helps you ease the mind, enabling you to be more present and to enjoy the “now”. Because of this, it allows people to fully enjoy, understand, and learn about nature as well as awakening their sense of observation. Yoga helps you connect with yourself and everything that is around you; therefore the relation between yoga and nature is important. The connection with the world around you can be truly powerful if you opt for outdoors yoga! 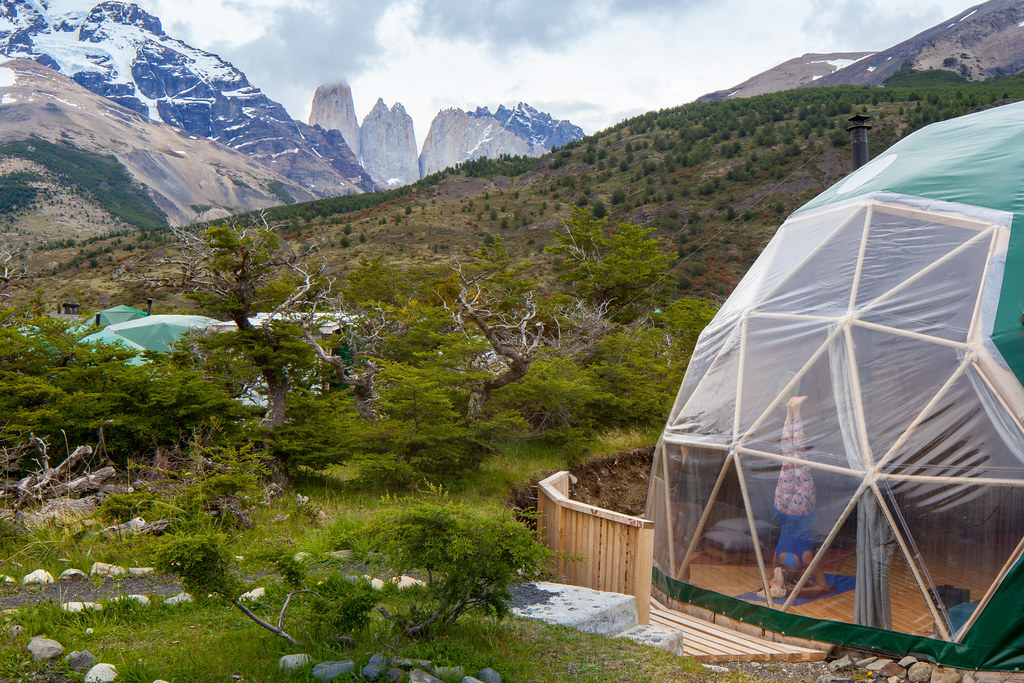 The Towers are a good inspiration for yoga, aren't they?

Most EcoCamp guests hike during their trip. Why do you think yoga and hiking are complementary?

After a day’s hike, one needs to stretch for a better muscular regeneration. Yoga helps to both oxygenate the body and improve breathing quality. Indeed, breathing exercises have benefits for both the health and the spirit and are a fantastic way to feel the present moment. Breathing cleanses the blood. Good breathing, besides easing the mind, gets you closer to your and Mother Earth’s essence.

What type of yoga do you teach at EcoCamp?

At EcoCamp, we practice asanas (postures) from different kinds of yoga such as Hatha, Ashtanga, and Kundalini. We also do pranayama (breathing exercises), mainly those that are used in Kundalini Yoga. The yoga sessions include meditation and deep relaxation, and stretching for the muscles which are used on the hikes; and to relax other muscles of the body.

Do you think anyone can enjoy yoga?

I think anyone can practice and enjoy yoga. That is even truer in Patagonia! Some active people may have difficulty finding the optimal concentration in a yoga session, but the setting of the yoga dome and the energies that one can feel in the wilderness easily enable people to enjoy the discipline. 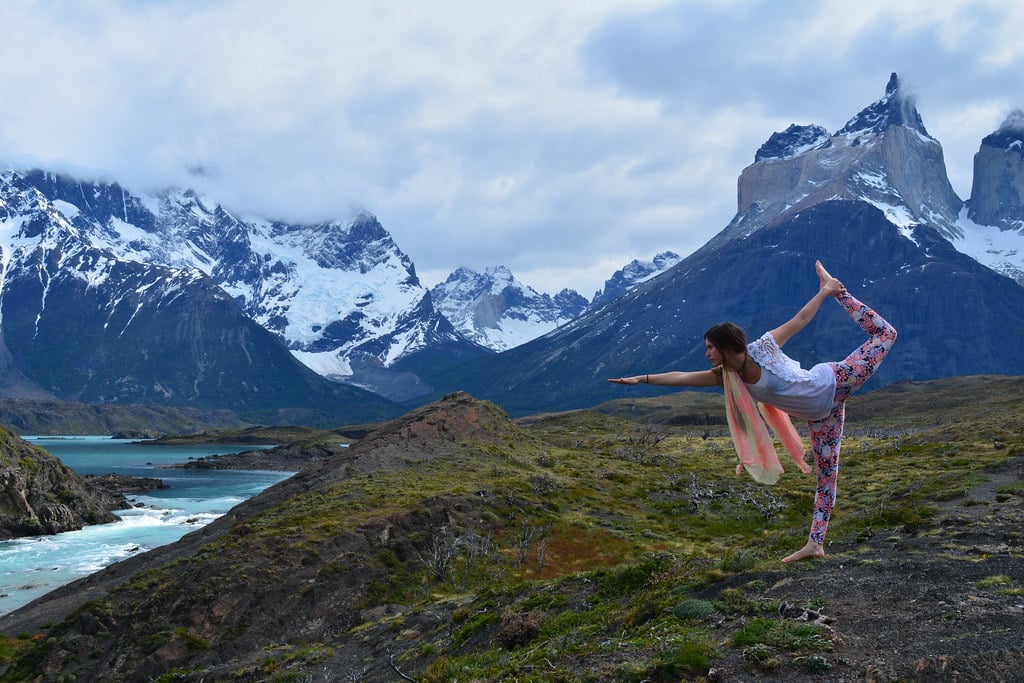 Seeking a connection among the mountains...

We took part in the evening yoga session (EcoCamp offers two yoga sessions per day, as well as private yoga classes for those who want to deal with Patagonia yoga in depth) as the wind was roaring outside. From the quietness of the spacious dome, we could see the trees dancing in the wind, and the huge glaciers of the Almirante Nieto Mountain in the distance. The woodfire seemed divinely delicious. A 15 minute meditation session concluded the yoga session. I felt good, and I asked the other participants how they felt. Just to know. 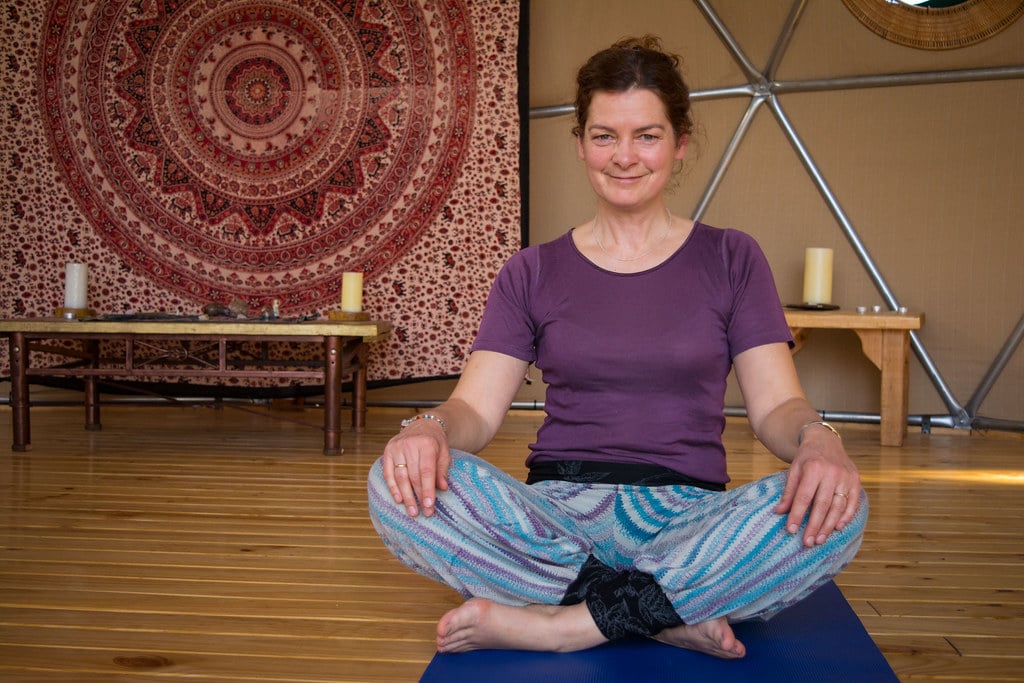 Henrika, Radolfzell, Germany: I just did Yoga for the first time. It was fantastic! The experience is quite hard to express with words, but Yoga helped me to completely feel the gratefulness of being here, now, in that incredible place. 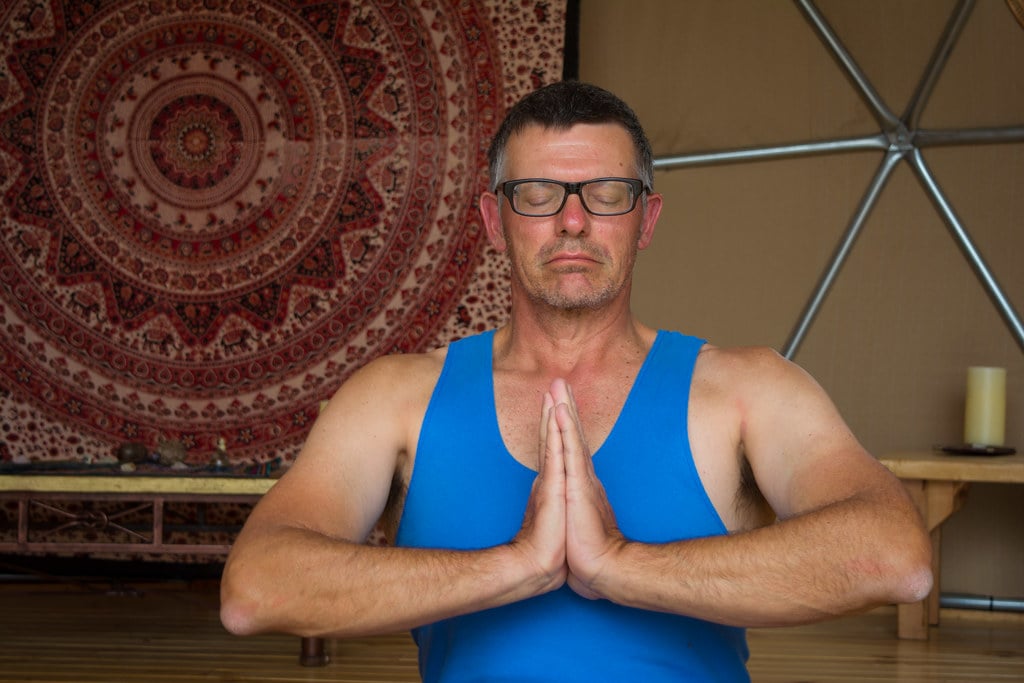 Steve, Sydney, Australia: You can feel the sunlight and listen to the rain in the yoga dome. It is a beautiful space. I mostly practice Yoga in Sydney, which is very different from a National Park! I think you can connect to nature in the city as well, but doing it in Torres Del Paine brings you a certain solitude and quietness. You directly witness the beauty of nature through the window. I did the 22km hike to the towers and my legs were quite sour. I found this yoga quite slow, it gave me time to stretch my legs and do different positions. Perfect after such an active day outside! 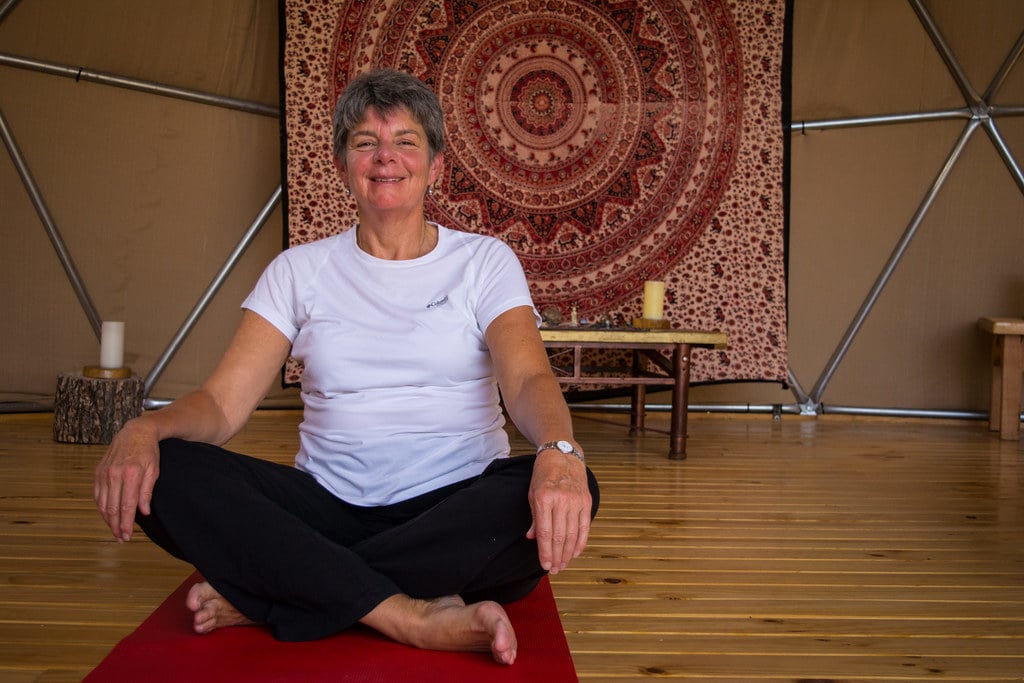 Sue, Sydney, Australia: I thought it was a great way to stretch out muscles after a long day trekking. You keep listening to the wind and feel part of nature. I already did Yoga before, as a beginner. But this was a perfect opportunity to practice. There were some postures I did not know, but the way it was explained was easy to follow.

At EcoCamp, we offer FREE daily group classes! You can also sign up for a Private Yoga Class Extension to add to your EcoCamp package.

Take an Epic Adventure to the Base of the Paine Towers

Timothy Dhalleine Activities
Updated on December 7th, 2020  Are you up for a trekking adventure to one of the most stunning viewpoints on the planet? It's a lengthy walking...
Read more