The uniqueness of Patagonia's pumas have caught the attention of more than just intrepid trekkers - a new documentary produced by VisionHawk Films makes them the stars of the wildlife world with a new documentary set to hit the big screen.  The international crew, comprising of teams from the USA and Chile, braved winter's subzero temperatures at EcoCamp in order to capture never before seen footage of these dramatic creatures. Our Guest Engagement Manager, Timothy Dhalleine, spent lots of time with the filmmakers and shares a behind the scenes look at the process of documentary making.

When I was a child, wildlife documentaries would catch my attention better than anything on Cartoon Network. And whether I was watching a big production or something independent, I would always wonder the same thing: how do they capture such impressive close-ups of wild animals?

Now that I've had the chance to witness the daily routine of some of the world’s most talented wildlife filmmakers, I understand  the incredible work such a production represents. Chilean wildlife filmmakers teamed up with VisionHawk Films to produce a film about Patagonia's pumas that will be released on the big screen in 2019. The team, led by Rene Araneda (Chile), Casey Anderson (USA) and Christian Muñoz (Chile), used the finest technology in the world of wildlife filmmaking to follow families of pumas in the wilds of Torres del Paine National Park, also known as “the crown jewel of Patagonia”, located in Southern Chile. They stayed off-season at EcoCamp Patagonia, shooting from the beginning of winter (May) to the end of year’s coldest time (September) . Did you say courageous? You can’t imagine how passionate these guys are. 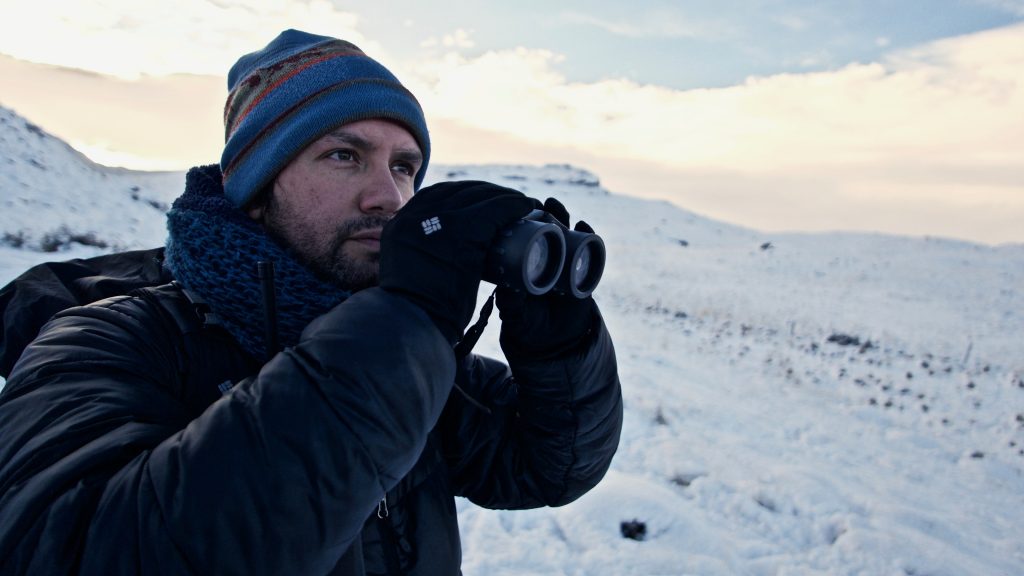 Producer Rene Araneda has been working for years in Patagonia and is one of the best puma trackers.

It may sound like a dumb question, yet few people really know about pumas. Most of us are used to seeing cheetahs, lions or elephants on our television screens, but pumas (also known as mountain lions) have not really had their time to shine in nature documentaries. This is generally because this elusive cat is hard to spot with a territory that stretches from Alaska to the southernmost tip of South America. Here in Patagonia, the good news is that this is one of the best places in the world to capture them because not only has its territory not been overexploited by humans, but Chile has been doing a great job so far at protecting the species. And Torres del Paine National Park is literally a haven for pumas.

It's also a bit of a dream for wildlife filmmakers, with its endless ice fields and granite peaks serving as a pretty cool background. With 181,414 hectares/448,280 acres of natural beauty, Torres del Paine has a huge area of grassland, or Patagonian steppe, where the lack of trees makes and the abundance of animals makes it the perfect place to spot pumas and understand their behavior. 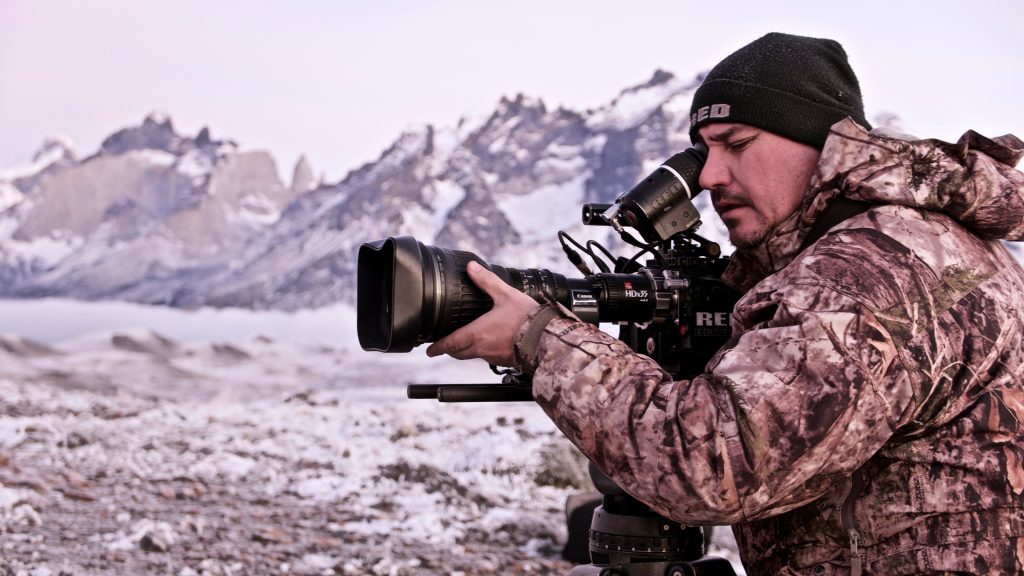 Wildlife filmmaker, Christian Muñoz, shooting a sequence in the heart of winter 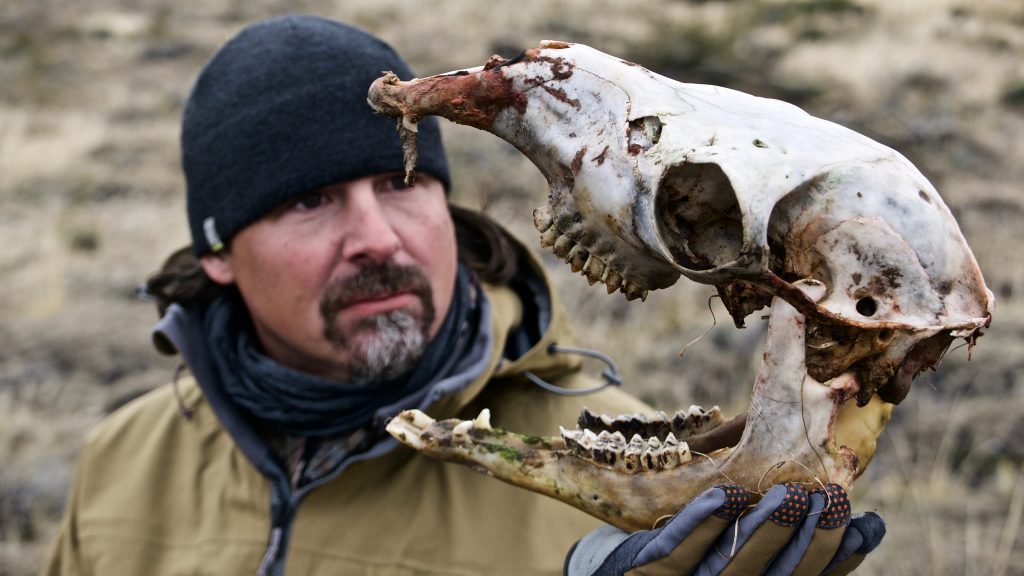 Casey Anderson studying the remains of the Puma's favorite food, the guanaco

What did the Team Focus on?

Storytelling is the art of good filmmaking so this is what the team have been doing from their base at EcoCamp Patagonia for the last 4 months - searching for great content. They started by following a family of pumas – a mother and her 3 cubs – and ended up filming the happy, tragic, and unexpected stories of death and life (no, we won’t spoil it for you!) all without annoying the animal. This documentary will show the interactions between family members, the conflicts between pumas, and the (very) special relationship between the pumas and the fragile ecosystem. They chose winter for a very good reason: this is by far the quietest time of the year in Torres del Paine, with few people on the roads and even less on the trails so pumas become less shy and can literally appear anywhere, making shooting specific animals a much easier task. 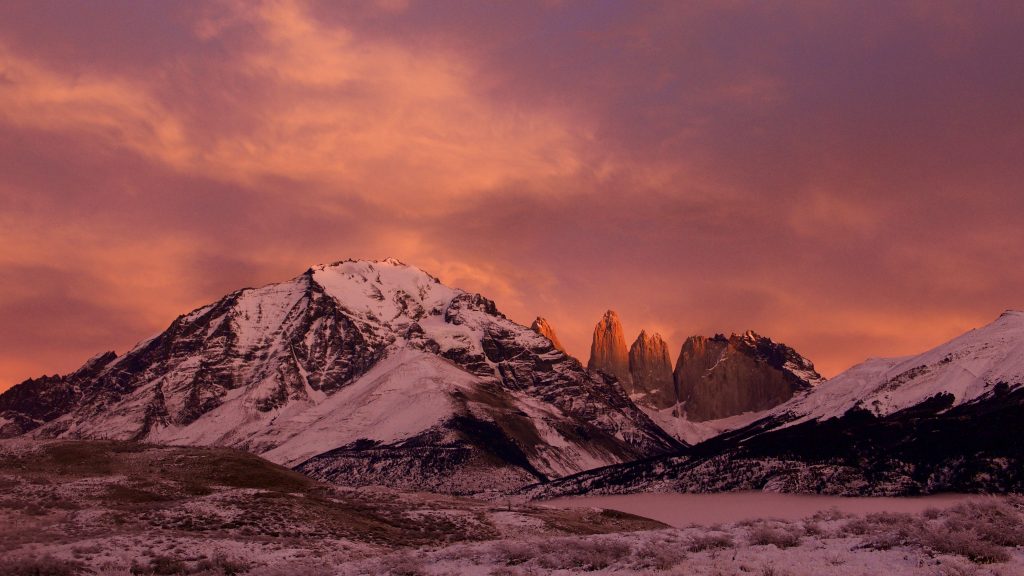 In a world where all things are grand, you'd better have a good eye if you want to spot a lion. 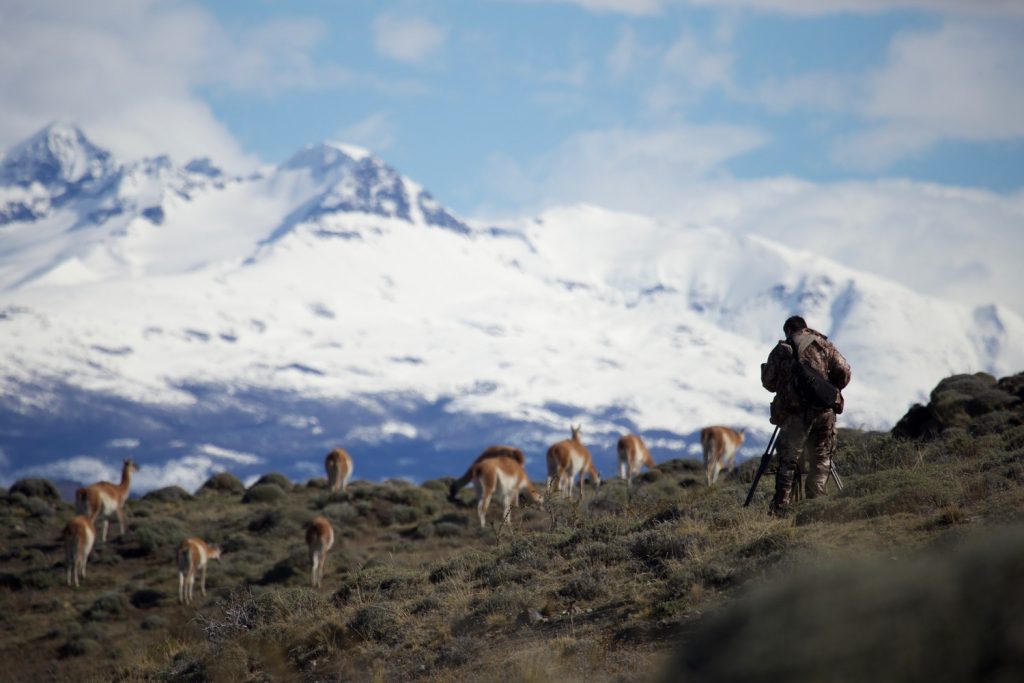 Herds of guanacos; if they sound the alarm, a predator may be close by.

That Technology Looks Insane. What Did They Use?

First of all, let’s clarify this: these filmmakers have already worked in Torres del Paine in the past, with projects such as the BBC's ¨Patagonia: Earth's Secret Paradise” (2015) and “Wild Chile” (2016).  This experience meant they knew exactly what to do and also received a permit from Chile’s national forestry organization, CONAF, so that they could work anywhere in the Park and go right off-the-beaten-path.

Nevertheless, the technology they used allowed them to remain as far as possible from the animals. They brought a Shotover F1 with them, which they set up on a car. As Shotover mentions on their website, “A 6-axis gyro stabilized platform that delivers unshakable stability with unmatched look down capability for use inverted, or right side up—on almost anything that moves.” With only a few dozen around the world (mainly in Hollywood) and a whooping 6K resolution, I am sure you can imagine how insane the footage this camera takes looks like on screen. If the puma is a kilometer away, the camera is controlled from inside the car with a joystick and a screen making it a great way to actually find animals without being noticed.

As for other cameras, the team used Red. Red is a worldwide famous brand in the world of cinematography, not only for the incredible definition but for its dynamic range, and depth of shadows. Red offers flexibility and motion for filmmakers as no other brand does. You can combine lenses for almost infinite zoom (imagine filming with a 1200mm at 4K resolution). You can work as a team for an optimized motion, with one hanging the camera and one working on the focus. These capabilities allowed the team to get the most epic footage but ... (I said I would not spoil it for you). 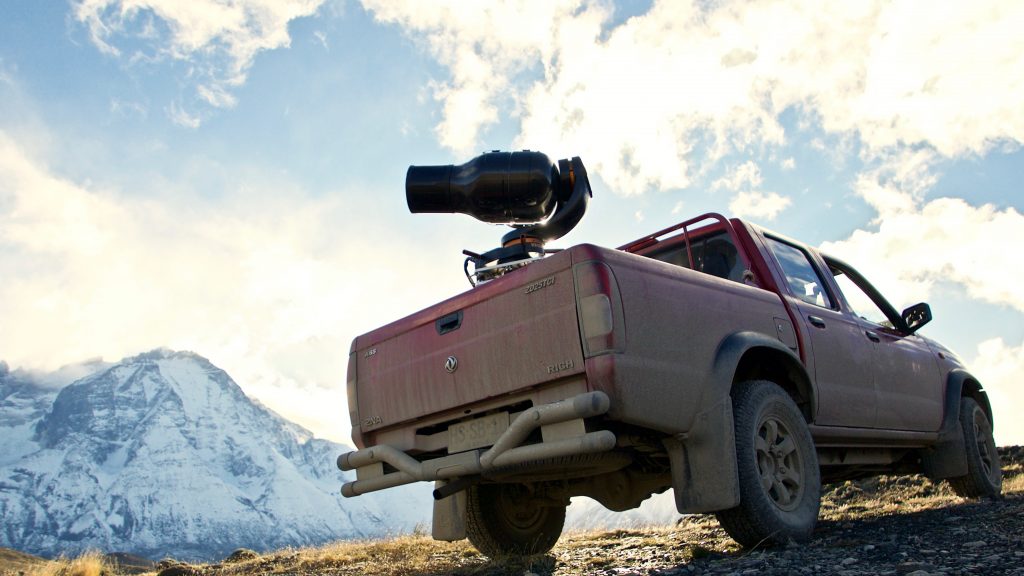 The Shotover camera mounted on the car that the team used 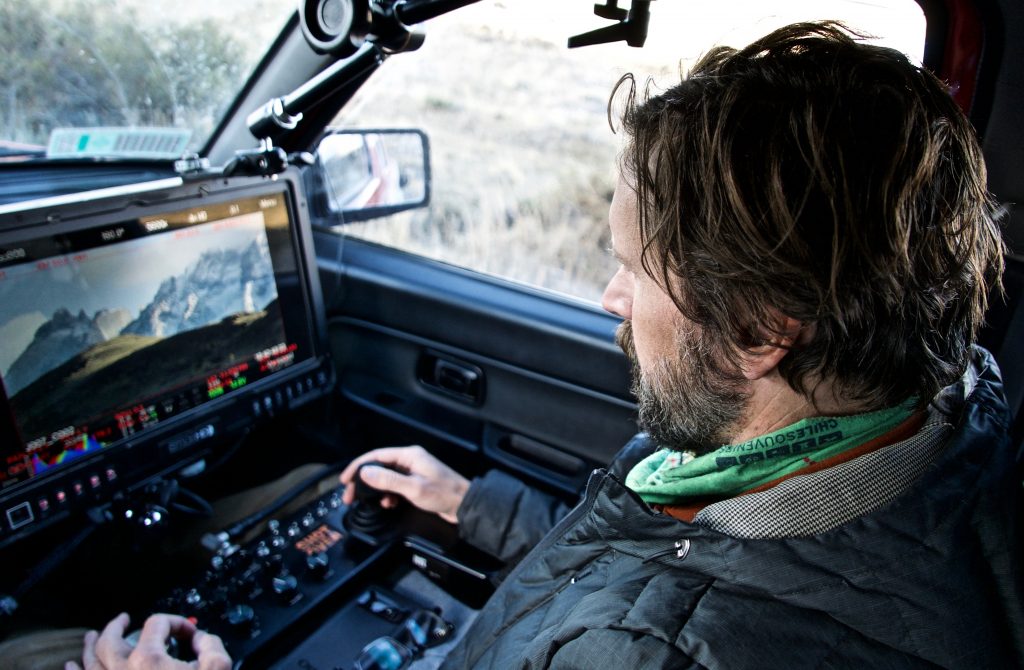 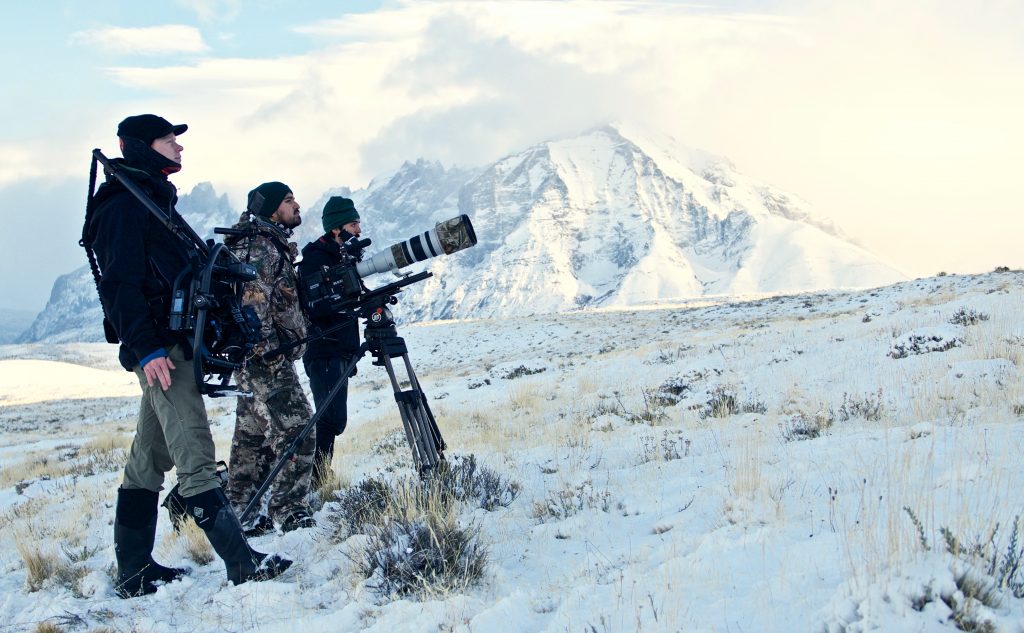 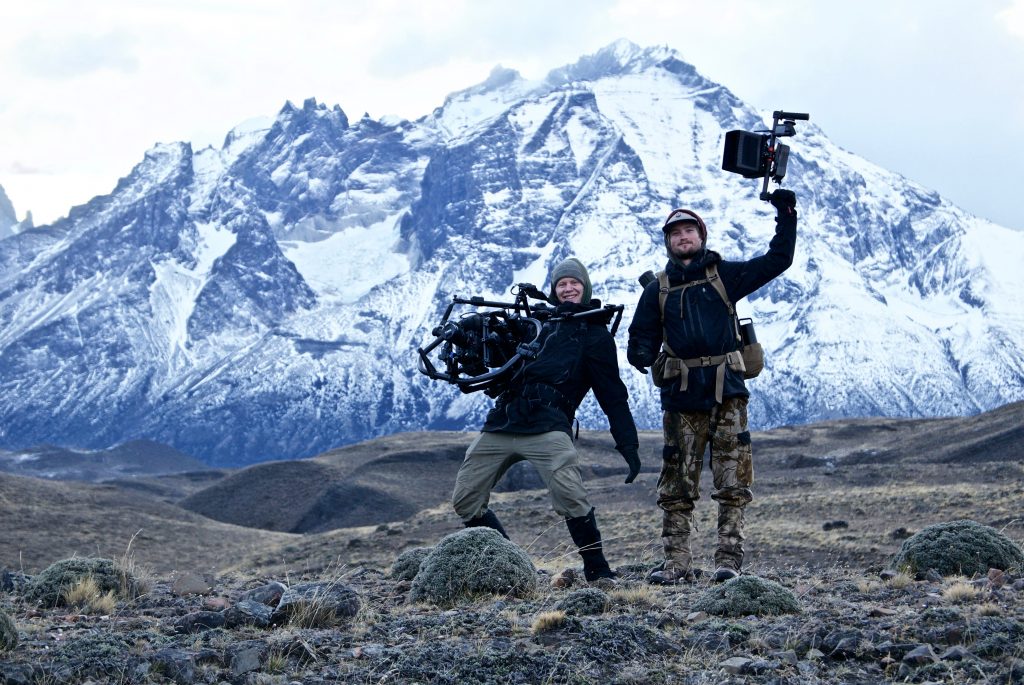 Perfect teamwork with one of the Red cameras

While staying at EcoCamp, the team would wake up right before sunrise and return after sunset (these are the best times to see pumas). They used to drive slowly, using the Shotover camera as a Puma Tracking tool. This is incredibly effective: with one person driving and the other looking around through the screen, it did not take long for them to spot pumas - sometimes up to 5 a day. The whole team would generally split into 3-4 different groups, depending on the story that needed to be underlined. For ex. One team would shoot landscapes, while another would walk off the path with Red cameras looking for pumas, while the Shotover team would spend the day shooting a family of pumas from the road. All situations were possible: some stories were interesting enough so that the whole team would gather and stay in the same place for a good part of the day.

As well as using the Shotover, they could also find pumas by listening to the puma’s favorite prey, the guanaco (a type of camelid) or by waiting next to a recent victim.

But it's Not Always Easy

The days in Patagonia can be cold, especially in winter. July 2018 was exceptionally so, with temperatures dropping as low as -15°C (5° Fahrenheit). If you think, however, that this would prevent the team from getting up and going outside with their cameras, then you’d be wrong. The team were still happy to wait for hours until the puma would decide to appear. That is what I call passion. 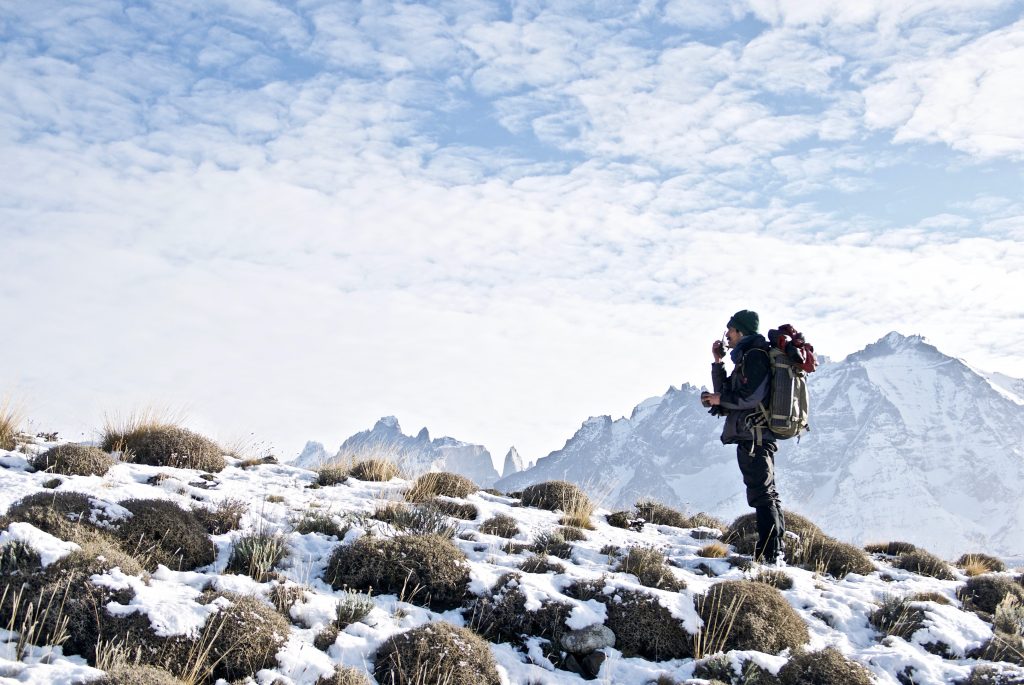 Walkie Talkies can make a huge difference, especially when walking distances are so big 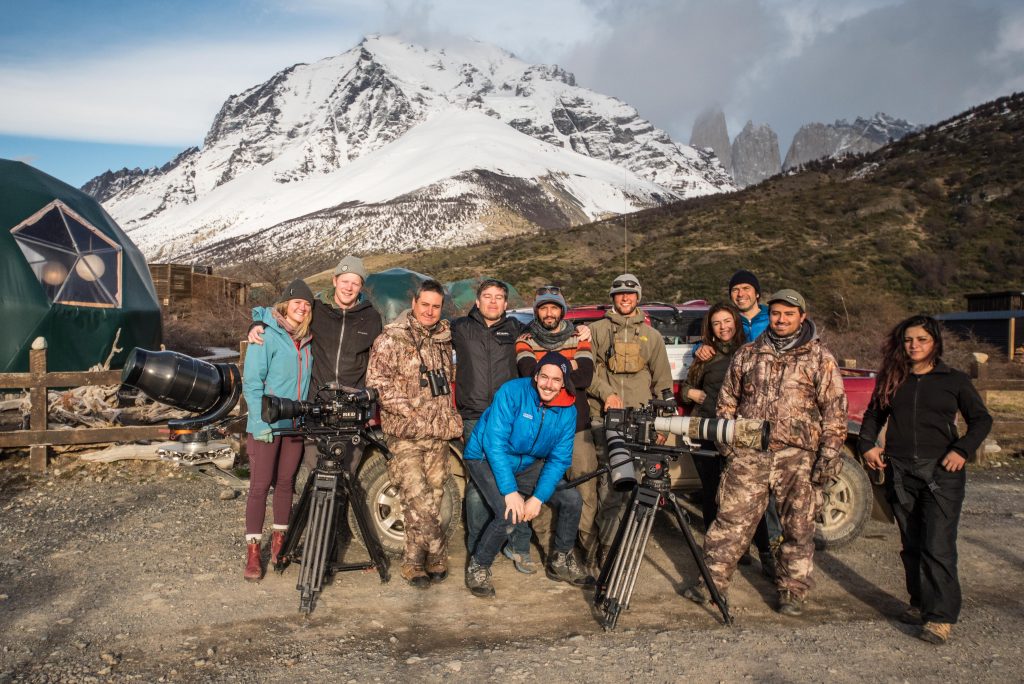 What Can I Expect from the Movie?

This will definitely show you that the puma may not be what you think it is. It is a fascinating creature with an ability to truly analyze what is around it and express love, fear or hatred. It is a social animal and not as lonely as many may think. As Rene Araneda (Chilean Producer) said, “Our aim is that such a movie can bring knowledge to people around the world and that people will find the animal so lovely and interesting that they will want to protect it”. I truly hope this will happen; there’s no doubt such a high-quality film will increase conservation about this beautiful animal. 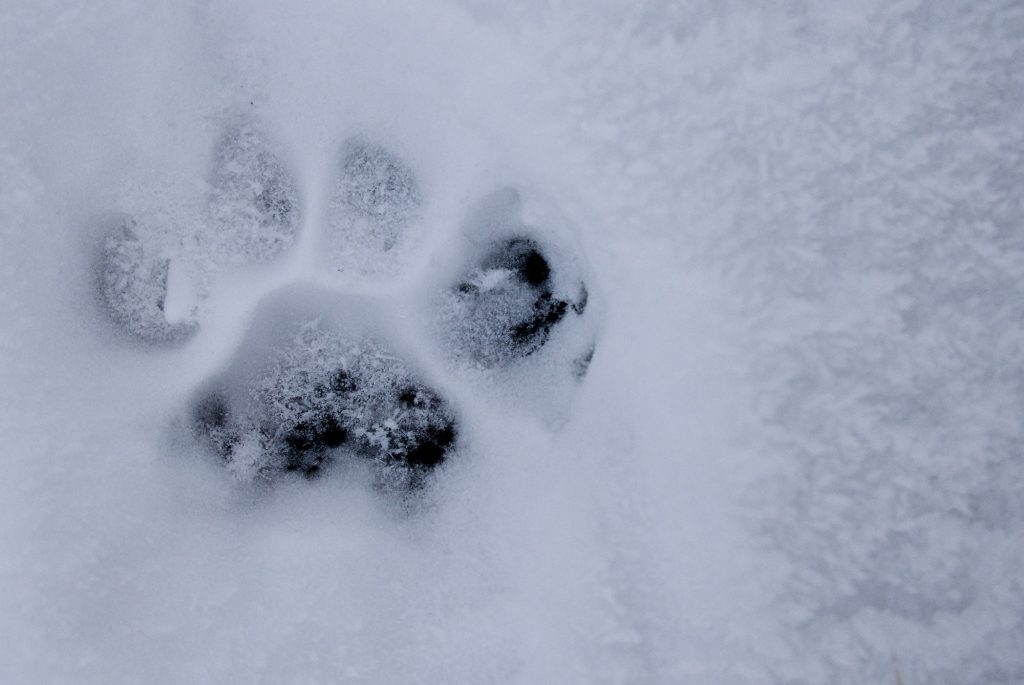