Your First Glacier (And Why You'll Never Forget It)

Having walked through a forest of knobbly-edged trees and across a rickety old bridge above a raging river, the sight that lay before us comes as something of a surprise. The pebbled beach stretches between two hills and is partially enveloped by smoky-colored water. Taken alone, the beach would surely impress but it's what dots its shore that causes gasps of excitement and a flurry of camera clicks. Icebergs dot the landscape, shafts of blue and white that gleam with the sunshine and capture the eyes of all around. 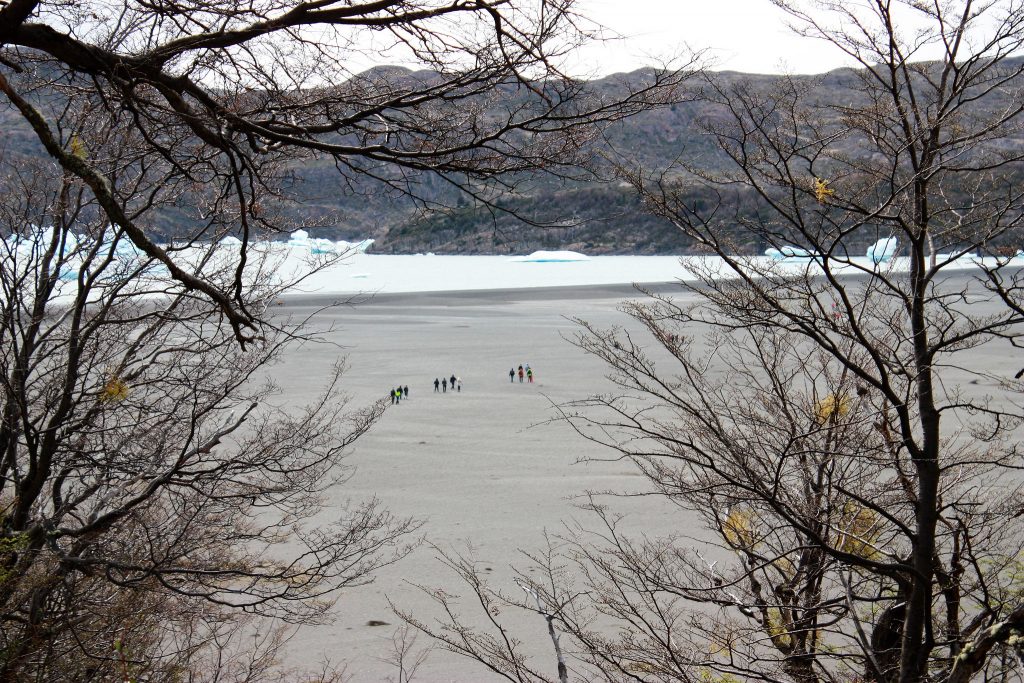 Crossing the beach looks simple but in reality, it’s a little bit like fighting an invisible force with one desire: to knock you down. We stand strong, but make the scurry across the pebbles as fast as we can to the boat. The catamaran makes this journey every day during the season, with a dedicated guide who translates facts into three languages faster than you can process one (English, Spanish, French). We take our seats but the moment we can, don our lifejackets and take to the decks to get an up-close view. The wind is relentless and causes our hair to lash around our faces like tiny whips, but this is not enough to make us leave. Icebergs float past, beautiful sentinels that hark back to another time. 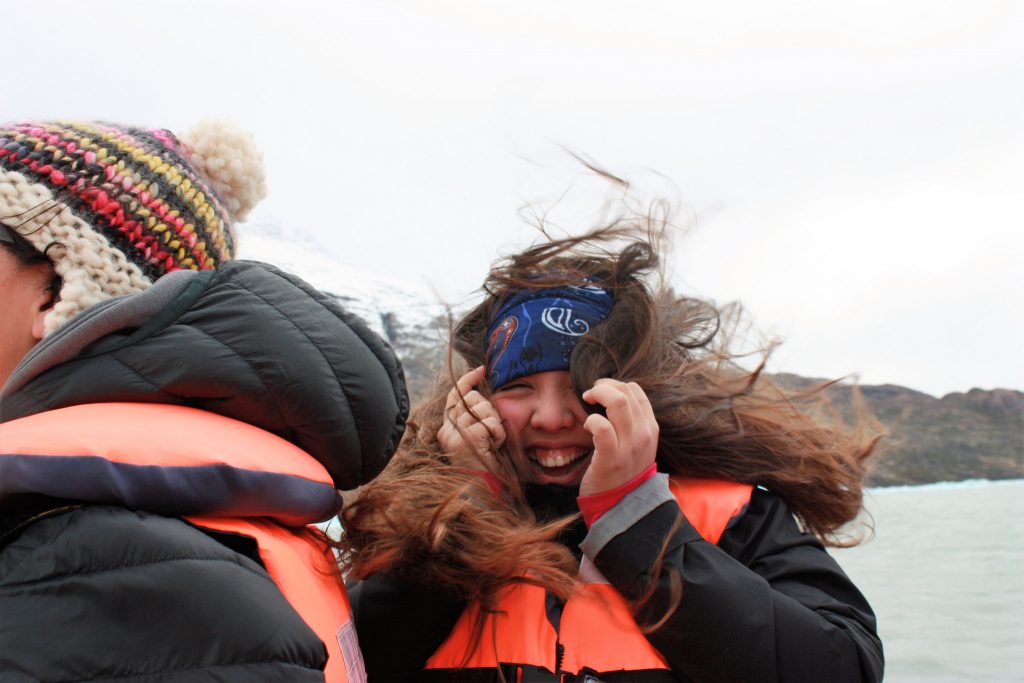 It's Enormous and It's Blue

We are on our way across Grey Lake to see the Grey Glacier, a 270km2 remnant of the original glacier that once covered all of Southern Chile and Argentina 18,000 years ago. Today there are just two ice fields left, the Southern Patagonian Ice Field (which you can see from the amazing Cerro Castillo trek) and the Northern Patagonian Ice Field. Together, these colonies of white equal 17,200km2, with some peaks reaching more than 3000m high, the majority of which (90%) can be found in Chile. 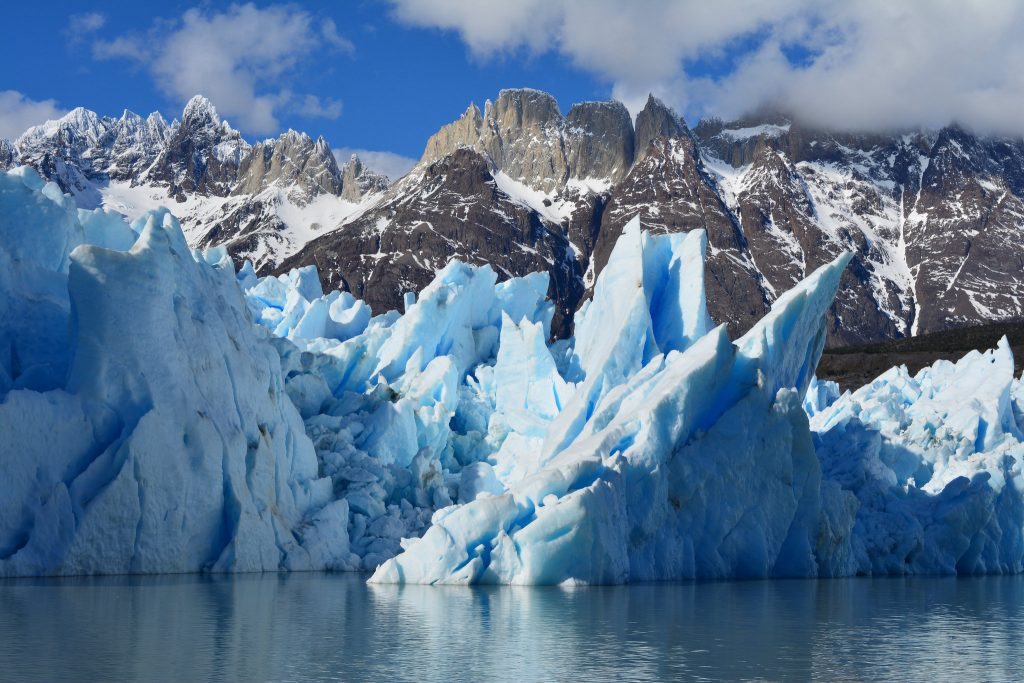 Up close to the Grey Glacier // Photo Credit: Timothy Dhalleine

Life In The Ice

The lake itself is dark grey - as its name suggests - thanks to the sediment that leaches into the water from the glacier itself, rendering its depths inhospitable to life. Incredibly, life manages to find a way ... inside the glacier.  In 1956, French scientists discovered Andiperla willinki hiding in the ice in Argentina, a species of insect that seemed to defy the laws of science. This little critter was then never seen again and was thought to be extinct until it was re-discovered in Grey Lake in 2001. It is now believed to be native to Chile and spends its extraordinary life immersed within the glacier - making it the only insect known to do so. Adults walk through tiny canals inside the ice while their nymphs stay submerged. They feed on natural waste, bacteria, and microalgae - all of which also call these glaciers home. The question is: how can they live inside the ice? The answer is their hemolymph (like insect blood) is based on a glycerin-based antifreeze that stops it from freezing to death. It can also withstand some crazy pressure, having been found a good 40 meters deep inside the glacier. 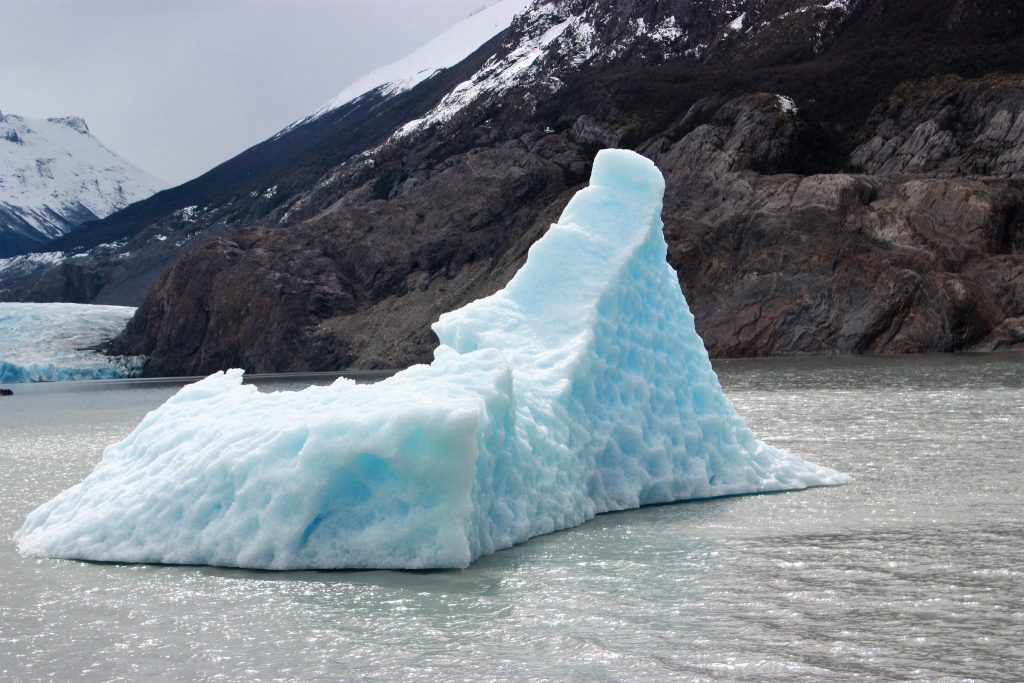 On our way to first face of Grey Glacier // Photo Credit: Helen Cordery

The boat takes us to see three faces of the glacier. Its sides are positively luminous, a deep blue that contrasts nicely with the darkness of the lake. The ice folds outwards to reveal cave slivers and deeper colors, a bit like the topping of a tres leches cake (albeit one 1000m tall). The glacier seems to splatter across the rocks that envelope it on either side, their surfaces smooth and terraced like rice paddies thanks to the glacier’s pressure. On all sides of the lake are cliff faces whose wavy spirals reveal a glimpse into the history of Torres del Paine - just 12 years ago, the island that we see before us was once buried deep beneath the glacier.

The landscape has been formed by the glacier, which originally covered this whole area // Photo Credit: Helen Cordery

In November of 2017, a colossal iceberg separated from the Grey Glacier sparking worldwide headlines that shouted climate change. The consensus is that the region’s glaciers are disappearing faster and higher than elsewhere in the world, double the rate of what it was between 1975-2000. Shrinking glaciers threaten Patagonia in a myriad of ways. Also at the end of 2017, a tragic mudslide caused by high-altitude glaciers claimed the lives of 18 people living in the township of Villa Santa Lucia, while ‘glofs’, melting glacial lakes that burst their natural dams, are an increasing threat. Since 2009, Lago Cachet 2 (Aysen) has been losing the equivalent of 46, 000 Olympic swimming pools into the nearby Baker and Colonia rivers, placing not only the township of Caleta Tortel but the region’s entire geography at risk.

Up close and personal with a melting iceberg // Photo Credit: Helen Cordery

Interestingly, while 95% of the glaciers are retreating, several are stable while others, such as Perito Moreno and Pio Xi, are actually advancing.  The boat slices through the icy, black water, and its pauses give us some respite from the gale that seems to be blowing around us. The icebergs that float past us are epic but their smaller remnants, which laze about the waves, appear to contain none of their famed blue sheen and seem a little sad. It’s a humbling experience to be out on the lake, beneath the wind, occasional drops of rain, and soaring condors that float above our heads. We are lucky that these incredible mountains of ice are now protected as national parks, though Chile (and Argentina) still have some way to go in tackling the causes and effects of climate change.

On our way back across the beach // Photo Credit: Helen Cordery